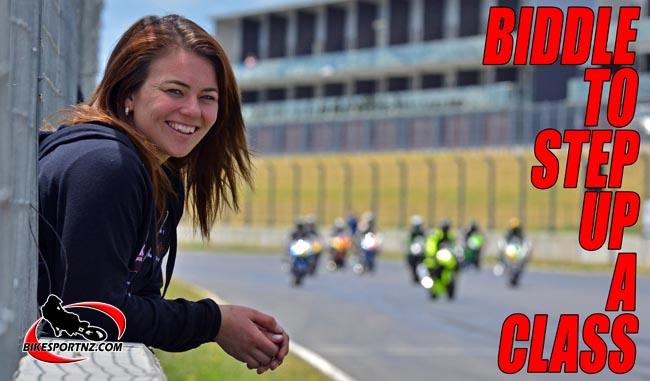 Auckland’s Avalon Biddle has big plans for 2015, ones that include again humbling some of the cream of Europe’s young male motorcycling superstars.

The 22-year-old from Orewa has been making waves in Italy, and other corners of Europe as well, and now intends to take it to the next level as she prepares to tackle the inaugural European Women’s Cup, run in conjunction with the European Junior Cup and the World Superbike Championships (WSBK).

While she contests the European Women’s Cup, Biddle will also score points in the parallel European Junior Cup, giving her the potential to win two European titles in one and also, interestingly, perhaps eventually pitting her against her Kiwi boyfriend Jake Lewis, of Rangiora, who is set to tackle the 600cc support class in the WSBK in 2015.

“The prize for winning the European Junior Cup is a ride in the 600cc WSBK support class. Winning that is the aim, to follow the example set by Jake when he won it two seasons ago,” said Biddle.

“If I can win this I will be the first women to do so.

“I like racing against the boys, but this new European Women’s Cup competition is more of a level playing field. Plus I’ll gain points for the separate European Junior Cup and that’s great too.”

For the two interlocked contests, Biddle will race a Honda CBR650F, all riders on identical bikes and each rider’s ability, and perhaps the unpredictable element of luck, the only factors that will separate them.

“It will cost me $35,000 to race the eight-race (European Junior Cup and European Women’s Cup) series; that fee covering the cost of bike and tyres.”

The competition visits six countries and there is also the cost of travel and accommodation that Biddle will need to pay for on top of all that.

“It’s a stepping stone to racing the WSBK.”

The first round is set for Aragon in Spain in April, with rounds also in Italy, the United Kingdom, France, Holland and Portugal.

Biddle has spent the past three seasons racing in Europe and this latest development is the culmination on that.

She finished runner-up in the Italian women’s championships in 2012.

“That opened a few doors for me,” said Biddle. “I crashed in one race of the championship and that’s what cost me the overall win, but I obviously did enough to impress the Italian team.

“I was up against the men but I managed to finish among the top 5-10 and achieved two podiums. This season I was part of the Moto3 project and was riding a development bike. We had quite a few teething problems with the development bike and I could only finish three of the 10 races.

“I have spent three seasons based in Italy. I didn’t know anything about the Italian language before I went across, but now I can get by quite well.”

So she heads back with continued support from the Italians and a resolve to reward their faith with results to be proud of, perhaps even to replicate her boyfriend Jake’s result, or better it by becoming the first female to win the European Junior Cup.

This is a crowd funding page that has been set up to help raise the money Biddle needs for her campaign.