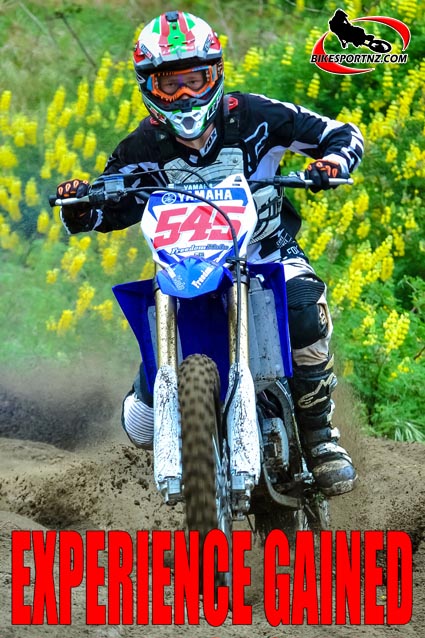 There is often no more vital element than experience when it comes to racing motorcycles, but a lack of experience so far seems to be no hindrance at all for Otaki teenager Jake Wyman.

The third annual Yamaha Taikorea 500 event near Himatangi on Saturday was the 15-year-old rider’s first competitive outing in a cross-country race, but casual observers would not have known that by the apparent ease with which Wyman won the 40-minute junior race.

What was also remarkable was that Wyman had only collected his new Yamaha YZ125 from Palmerston North’s Freedom Moto bike shop owner Barry Higgison just a few days earlier.

“We only picked up the bike on Tuesday,” Wyman explained.

“I have done nothing to it since it came out of the box. I just climbed on and raced it.

“I’ve been riding bikes since I was five, but never competitively, until just recently.

“I am home-schooled and mum and dad said, if my studies were going well, I could build a motocross track. So, back in March this year, I borrowed the neighbour’s digger and built a track … and everything has just happened from there.

“I finished second overall at the Kapi Mana Motorcycle Club’s (four-round) Moonshine Motocross Series, which wrapped up last week and then I decided to do this cross-country race. This was my first ever cross-country race and I loved it.”

The 32-year-old Reeves won both the two gruelling one-hour races and both the 10-minute enduro-cross “sprints” as well.