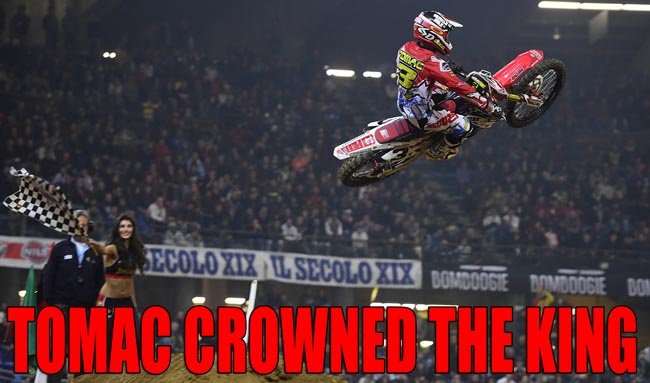 In a sold-out PalaFiera of Genova, during the Monster Energy Genova Supercross, the American Eli Tomac, from Cortez, Colorado, was crowned King of Genova.

The American won the spectacular final, between the top rider of SX1 and SX2, the other American, Zac Osborne, and the French rider Cristophe Pourcel; the Italian Matteo Bonini ended the race in fourth place, after a great comeback.

Genova Supercross confirmed its tradition of great entertainment, bringing under the roof of the PalaFiera the world’s greatest riders of the Supercross, the Americans Justin Barcia, Tomac and Osborne.

On the track perfectly designed by the ‘magician’ Armando Dazzi, the overseas riders have made extraordinarily intense duels against some of the best specialists in the motocross world, first of all Pourcel.

The 2013 King of Genova, Justin ‘Bam Bam’ Barcia, was victim of an accident, fortunately without serious consequences, when he was trying to pass the leader of the second SX1 final, Cristophe Pourcel. Barcia was forced to give up and to miss the opportunity to defend the title.

As he did one week ago in the Supercross of Lille, Eli Tomac dominated the race, winning the three motos and scoring the fastest lap.

One of the topic moments of the evening was when Vincenzo Nibali, the winner of the Tour de France, was called on track to collect the prize that KTM Italy had promised to the Sicilian in the event of victory in the Grand Boucle.

The race was the last of the Internazionali d’Italia and crowned the French Cristophe Martin as the SX1 Champion 2014, second was Matteo Bonini and third was Angelo Pellegrini.