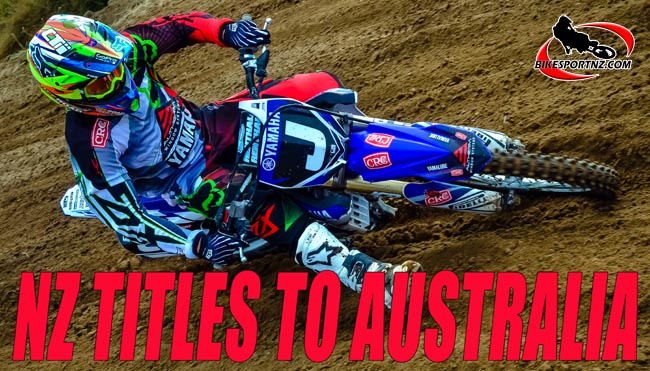 With 2013 national open class supercross champion Cody Cooper, from Mount Maunganui, still recovering from injury and unable to defend his open class crown, it was left to Queenstown’s Scott Columb and Rotorua’s John Phillips to try and keep the Australians at bay this time around.

While Columb and Phillips both produced strong performances at the Brent Scammell Honda-sponsored 2014 New Zealand Super Cross Championships at the popular Cooper-Vetsouth Supercross Track at Winton last night, they ultimately could not match the consistency of Australian Sam Martin, who finished 1-1-3 in his three outings to claim the main open class trophy.

Columb finished 3-2-1 to finish overall runner-up and Phillips went 2-3-2 on an evening of very close racing, to claim the third place ranking, while Australian Sam Duncanson and Blenheim’s Tommy Dillon rounded out the top five.

A double class winner in 2012, Victorian rider Martin was also a contender for the Lites (250cc) crown this season, although he was forced to settle instead for overall runner-up behind another Australian, 2013 defending Lites class champion Jay Wilson, making it an Australian 1-2 in the class.

Wilson finished 1-1-2 in the three races, with Martin registering a 2-2-1 score card to take the No.2 spot, while Dunedin’s Campbell King chimed in with three third placings to earn the final place on the podium.