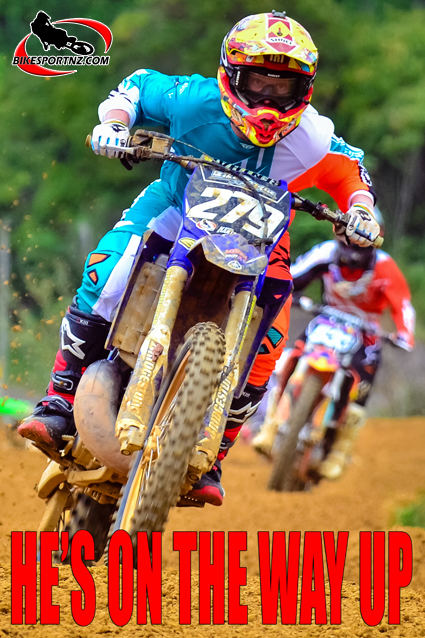 Otorohanga’s Hayden Kanters left his best until last at the annual Waikato Motocross Championships, on the outskirts of Te Kuiti, at the weekend.

The 18-year-old plasterer knew he was in for a fight when he saw national champion Josiah Natzke, from Hamilton, line up in the MX2 (250cc) class on Sunday, but this was Kanters’ home track and he wasn’t about to be intimidated.

With his home town fans cheering him on, Kanters (Bike Torque MX Antix BikesportNZ.com Yamaha YZ250) had put up a great fight.

But a feisty attitude is only part of the equation and, when luck did not favour him in the second of his three MX2 races and he crashed early on, Kanters needed to rely heavily on skill, strength and tenacity to claw his way back into the fight.

Kanters charged from last place on the track to catch the leaders, eventually forced to settle for sixth place, with Natzke again claiming the win.

Then came the final race of the day and retribution time for Kanters.

The Yamaha man snatched the lead right out of the start gate and simply “checked out”, winning the third race ahead of Natzke.

“I knew I had to be at my best, not leave and openings for Natzke to get past … and just not make any mistakes. It was a great way to end the day,” said Kanters.

This result was enough to earn Kanters overall runner-up spot for the day and also give him a huge confidence boost ahead of the summer motocross season.

The next major showdown between Kanters, Natzke and Phillips will likely be at the Auckland Motocross Championships, near Pukekohe, on December 7.