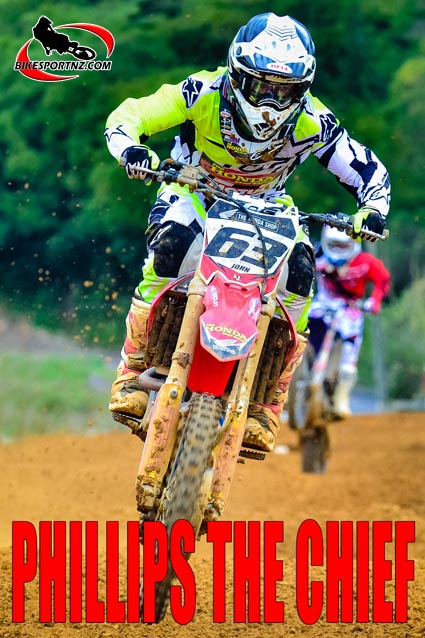 Bay of Plenty’s John Phillips was the chief of Waikato at the weekend.

The 21-year-old Kiwi international from Rotorua  was at his scintillating best at the annual two-day Waikato Motocross Championships, on the outskirts of Te Kuiti at the weekend, taking his Honda CRF450 to run away to an impressive hat-trick of wins in the premier MX1 class.

Riding for The Honda Shop Racing Team, the farm worker didn’t have it all his own way and had to fight for his wins, with fast-starting Waitakere rider Ethan Martens (Altherm JCR Yamaha YZ450F) keeping Phillips honest at the front, but, once in clear air, the Rotorua rider seemed unstoppable at the Livestock Countrywide-sponsored event.

“I always enjoy racing against Ethan. He’s a safe rider and does nothing silly,” said Phillips.

“I made a few mistakes today but managed to claw my way back from third in race one to take the lead and the win.

“I had a poor start in race two and then had mud caught up in my rear brakes. I kicked the mud free and put down a bit of a charge.

“I think I managed to pressure (race leader) Ethan Martens into making a mistake and he crashed on the final lap, allowing me to take another win.

“I tried a few different lines in the third and final race and put a bit of a gap between me and Ethan.

“The bike was brilliant and the Pirelli tyres hooked up perfectly. I’m really looking forward to my next race, probably the Auckland Motocross Championships (near Pukekohe on December 7).”

A junior member of The Honda Shop Racing Team squad, Cambridge’s Trent Collins, also had a satisfying weekend, finishing a close runner-up to Mangakino’s Maximus Purvis (KTM) in the 12-16 years’ 65-85cc class during junior racing on Saturday and then backing that up with a hat-trick of wins in the 12-16 years’ 125cc junior class races on Sunday.

Pukekohe’s Kurtis Lilly led a Husqvarna 1-2 to the top of the senior 125cc class, heading off multi-talented moto trials, motocross and enduro exponent Liam Draper, of Auckland, by seven points.

Kanters left his best until last when he won the final MX2 class race of the weekend. Unfortunately for him it wasn’t enough to gobble up the points lead built by Hamilton international Josiah Natzke (CMR Red Bull KTM), who won the class by 10 points from Kanters.

Kelly and Jacob Steel finished sixth and seventh overall respectively in the senior 125cc class, while Chloe Steel showed amazing fighting qualities to take her Honda CRF150 and battle with the leaders in the women’s class on Sunday, eventually settling for sixth outright despite the leading women all riding much more powerful 125cc and 250cc bikes.