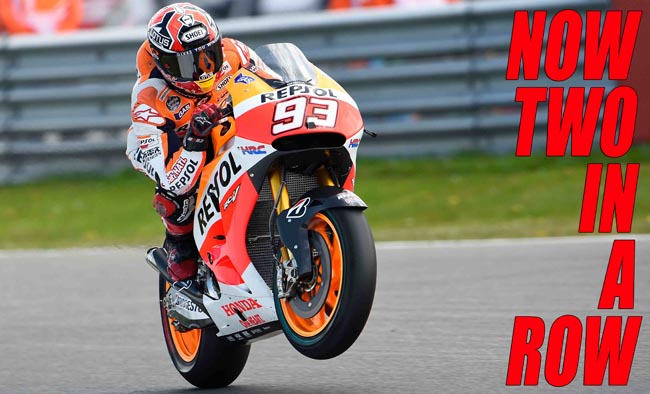 A second place finish was enough for Spain’s Marc Marquez to wrap up his second consecutive MotoGP world crown at the 15th round of 18 in Japan at the weekend.

But, despite winning the world crown with three rounds to spare, Marquez said the huge weight of expectation this season made his job of retaining the title more difficult than winning the crown at his first attempt in 2013.

The Repsol Honda rider finished as the runner-up behind Yamaha’s Jorge Lorenzo at Motegi in Japan to secure back-to-back premier class championships and although Marquez has dominated the series, winning the first 10 races in a row, the 21-year-old said holding on to the world title has been anything but easy.

“To win the world championship already last year was amazing and this year maybe looked easy for the people, but it was even more difficult because last year I didn’t have pressure and if I made some mistakes it was okay, because I was a rookie,” Marquez said.

“This year the pressure was there and I tried to manage well and I did a perfect first part of the season, but maybe with the advantage I had in the second part I had the chance to take more risks at Misano and Aragon, but it is a lesson I will learn for next year.

“I always looked smiling and happy but it was difficult to keep that level and that concentration because people expect a lot from you and that pressure is really high for everybody,” he added.

“When I started the season I felt so good and we had the advantage during the first part of the season. Jorge was trying and Valentino (Rossi) was there and also Dani (Pedrosa) was trying a little bit in some races, but we had that advantage but until the end you never know because you could have some injuries and some races like Misano and Aragon.

“You know that during a season you will have a minimum of one or two mistakes because it is really long and I was able to manage well, but especially with a big help from Honda,” he said.

“It was important to keep a good motivation and a good relationship inside the box and also to be really professional and thanks to them I win the title.”

Marquez’s title triumph in Japan was an added bonus for Honda, even if the Spanish rider would have preferred to retain the championship in front of his own fans at Aragon.

“For Honda it is really important to win the title here at Motegi, but I would prefer Aragon, because it is my home circuit,” Marquez said. But the second circuit that would be better for everyone [to win the title] is here and the pressure was there, because I remember I met the big boss on Wednesday and he said he would come on Sunday to see the victory.

“I was a little bit afraid, but I saw him in the parc ferme and I gave him a big hug and I think he will be happy too!”