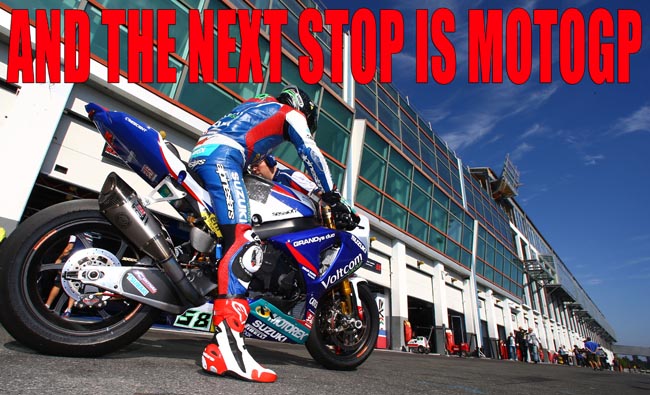 Ulstermen Jonathan Rea and Eugene Laverty made their penultimate appearances with respective teams Pata Honda and Voltcom Crescent Suzuki during the World Superbike action at Magny Cours in France just over a week ago.

Both men are contractually forbidden from speaking publicly about their new deals until next month, but Laverty’s two-year deal with MotoGP team Aspar Honda – where he will ride alongside former world champion Nicky Hayden – is expected to be announced shortly by the Spanish-based team.

Rea’s deal with Kawasaki to join current World Superbike champion Tom Sykes in an all-British assault on next season’s WSB championship was penned at the beginning of September. But just like Laverty (pictured above), any personal announcement from the Manx-based Ballyclare lad has been embargoed until next month, when he is expected to test Kawasaki’s ZX-10R for the first time, following the final WSB round in Qatar.

It’s a move that many within the sport have been expecting, after Rea’s loyalty to Honda during his eight seasons with the Dutch-based Ten kate Honda squad, didn’t open the door to a full time ride in MotoGP.

It’s a sad state of affairs when 40 World Superbike podiums [15 wins], a Suzuka 8-hour victory and a brace of stand-in MotoGP rides for the injured Casey Stoner back in 2012, were obviously not enough to get Rea the ride he thoroughly deserved.

With Cal Crutchlow, Bradley Smith and Scott Redding already giving MotoGP a strong British presence, then it’s more than likely the Aspar and LCR Honda teams were encouraged by commercial television rights holders Dorna to add Irish and Australian representation to a championship dominated by Spanish and Italian riders.

Paradoxically, 27-year-old Rea, who currently holds third place in the championship standings, is set to take his best ever finish in the World Superbike class on the ageing Honda Fireblade, which would be a fitting farewell to his family-owned Dutch squad.

But, as ever, JR remains fully committed to the task in hand despite a vivid green pair of Kawasaki leathers with the name Rea emblazoned across the backside – no doubt ready and waiting on the production line at Alpinestars in Italy.

Following a four-week break, where a lot of time has been spent on his motocross machine in the Isle of Man, Rea said: “I’m really excited to be going back to Magny Cours as I enjoy the circuit layout a lot and its fast direction changes seem to suit our package really well. To be honest, I’m just looking forward to riding the bike again as these long gaps between the last few races are not good or helpful for maintaining any kind of rhythm.”

This time last year, Laverty was challenging for the WSB title with Aprilia, following 19 podiums and nine wins during a championship campaign that saw him finish in second place.

With just two podiums and a victory on the opening weekend in Australia attached to his resumé, this term with Suzuki, it’s now a matter of damage limitation in the final races of this season.

“We need to find a way to transform our strong pace in practice into race pace. It’s no secret that we have struggled to match the others on new tyres and a full tank of fuel and I hope we can make improvements in this area.”

The next round of the WSBK is in Welkom, South Africa, this weekend.