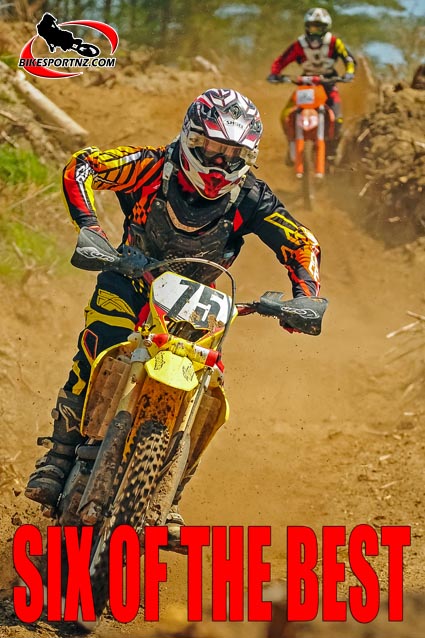 There’s no rest in sight for the nation’s leading cross-country motorcycle racers.

With support again from Suzuki New Zealand, the popular annual Acerbis Four-Hour cross-country race near Taupo, now in its sixth year, promises to be another classic.

And it’s not hard to see why – run by Epic Events, the event has been growing in popularity each year and an estimated 400 riders have signed up this time around to tackle the gruelling dirt bike marathon in the Tahorakuri Forest, on the road between Taupo and Rotorua, this Saturday (November 1).

A wide cross-section of riders from various motorcycling codes will come together to race through the trees and over the pumice and sand of the Central Plateau, forming up as two-rider teams or simply choosing to go it alone as an ironman contestant, making this one of New Zealand’s premier off-road bike events.

The trick for a rider is determining whether he or she should share riding duties with a similarly-skilled exponent, and therefore make it a series of short sprints, with a recovery rest in between each lap, or deciding whether he or she has the strength and stamina to ride solo and charge across increasingly rough terrain for four hours without a break.

The bikes are built to last and the only real reason to stop is to refuel every 30-kilometre lap, or maybe every two or three, but there’s also a lot to be said for a rider who perhaps uses an after-market, jumbo-size fuel tank to bypass the pits and stretch out an advantage.

Two-rider teams are permitted to use two separate bikes, a wrist-band change-over in the pits a way of “passing the baton”, which means riders won’t have to race on unfamiliar bikes or have to compromise with suspension or comfort settings. This also means some very high speeds can be achieved.

If an outright win is out of reach, there are still plenty of separate class wins for the riders to chase – solo class, father/son team class, women’s class or mixed (male and female) teams’ class and there is also a new veteran teams’ class where the two riders must have a combined age of over 80 years.

Taupo’s Brad Groombridge was a revelation at the event last year, powering his Suzuki RM-Z450 through the field after a poor start to eventually win the race outright and what was even more remarkable was that he did that as an ironman, the first time that had been done.

The Suzuki Six-Hour dirt bike marathon in early October was ruined by the weather with torrential rain wrecking the track near Tokoroa – the race that day eventually abandoned after just two-and-a-half hours – and many of the same riders who were denied a full day’s racing on that occasion will be turning to this weekend’s Acerbis Four-Hour to get their adrenaline fix.

Suzuki riders were a feature at this Acerbis Four-Hour event in 2012 too, with Mount Maunganui’s Rhys Carter and Paraparaumu’s Jesse Donnelly winning the day, while fellow Suzuki stars Mark Penny (pictured above), of Te Awamutu, and Kaukapakapa’s Josh Jack teamed up to finish runners-up that year.

The 90-minute Motomuck Junior 90 race acts as a “curtain-raiser” to Saturday’s main race and that starts at 8.30am, attracting a who’s who of New Zealand’s rising young dirt bike stars.

The four-hour senior race kicks off at 11am.