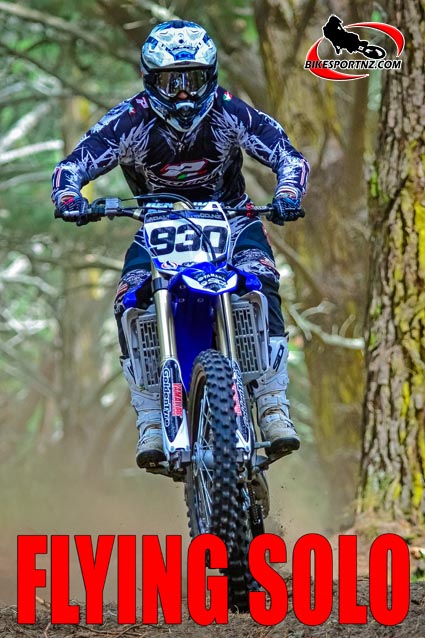 Two out of three isn’t bad … that is certainly the view of Palmerston North’s Adam Reeves.

With two wins from two starts, the talented Yamaha rider proved himself a dominant force at the Spectrum Woodhill Two-Man Cross-country Series this season. The only problem for him was that this was a three-round contest.

The 32-year-old, who is supported by Sargent Yamaha in Carterton, Bikesportnz.com and Darbi Accessories, headed into battle all alone against some of the best two-rider dirt bike combinations in New Zealand when took his Yamaha YZ450F and drove north to tackle the third and final round of the series on Sunday.

But it didn’t matter that he was racing solo against the strong two-man pairings of riders such as Kaukapakapa’s Josh Jack and Muriwai Beach’s Luke Mobberley, Morrinsville brothers Hayden and Nathan Tesselaar or young Auckland pair James Mancer and Jake Wightman, because Reeve’s real aim was to win the separate ironman section of the event. And that’s exactly what he did, crossing the finish line an amazing third overall and 11 minutes ahead of his nearest rival, Taumarunui’s Cody Davey, who finished Sunday’s race as ironman class runner-up, although actually back in sixth spot overall.

Unfortunately, although a runaway class winner at both the rounds he contested this season, Reeves had been forced to skip the series opener in July and Davey’s ironman class runner-up result at round one (behind Masterton Yamaha ace Reuben Vermeer), coupled with his fourth and second placings at the two rounds that followed, was enough for the Taumarunui rider to clinch the ironman class win for 2014.

“It would have been nice to win the ironman title again this year, but I had no choice but to skip round one of the series,” Reeves lamented.

“I got a reasonable start on Sunday but I was riding too tight and I was getting frustrated with myself. Once I was warmed up, I was away and I had soon created a good-sized gap back to Cody (Davey).”

Meanwhile, fellow Yamaha riders Chris Power (YZ450F) and team-mate Mitchell Nield (YZ250F) had been ideally placed to win the event outright, just two points behind series leaders Jack and Mobberley, until it all turned to custard for them at Sunday’s final round.

Power had carved his way through traffic after a poor start and was up to second place by the end of the first lap, when Nield took over from him, but when Nield suffered a huge crash soon afterwards, that was the end of their campaign.

“It was my first time out on the new YZ250F four-stroke and, when I’d seen Chris get us into such a good position, I decided I should push hard to try to take the lead,” said the 26-year-old Nield.

“But I clipped a tree stump and it cart-wheeled me over the handlebars. I thought I’d be okay to carry on but the wheel rim was all buckled and I was pretty sore too and could hardly walk,” the Bay of Islands rider said.

“I guess these things just happen sometimes. It’s all part of racing.”

So BikesportNZ.com-supported rider Jack (Suzuki RM250) and riding partner Mobberley (Gas Gas EC125) were outright winners on Sunday and therefore able to make it two Woodhill Two-man Series wins in a row after they had also scored the outright series win for themselves last season.

Atiamuri’s Hadleigh Knight and Morrinsville’s Simon Lansdaal (both riding KTM bikes) were runners-up on Sunday, ahead of solo rider Reeves, with the Tesselaar brothers and the Mancer/Wightman pairing rounding out the top five.