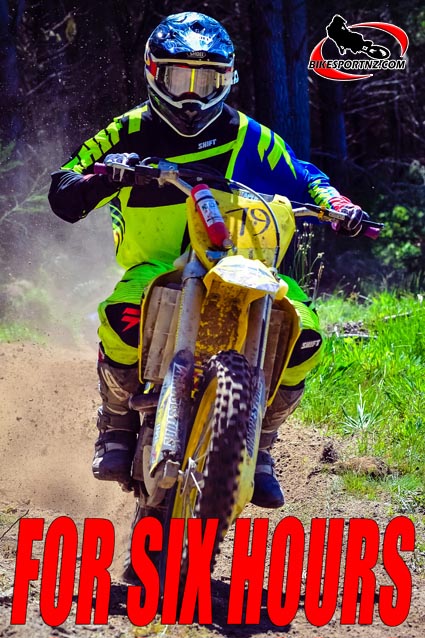 If there is one piece of silverware that is coveted most by the Kiwi dirt bike fraternity, it is probably the trophy for winning outright at the big annual Suzuki Six-Hour Dirt Bike Challenge.

The popular stand-alone event near Tokoroa, set this year for Saturday, October 4, typically attracts the cream of New Zealand’s off-road motorcycling community, including Kiwi international stars and national champions from many of the various biking codes – including cross-country racers, enduro experts, moto trials exponents, motocross heroes and even road-racing legends.

The marathon off-road race in the Ohakuri Forest, off State Highway 1, about halfway between Tokoroa and Taupo, will be no exception with an abundance of ‘star’ riders expressing a keen interest, perhaps none more so than last year’s champion pairing of Brad Groombridge and Daryl Hurley.

Taupo international motocross ace Groombridge, aged 24, and 38-year-old Hurley, a multi-time former national and Australian motocross champion from Hawera, shared riding duties to win the gruelling race last season and will again team up to tackle it next month.

The course will run in reverse direction to last year, with steep up-hills becoming steep down-hills and vice versa, but these two men still obviously rate among the favourites to win.

In a new twist this year, riders are permitted to ride their own bikes, rather than being forced to share one bike between the two of them, as in past seasons, and this means Groombridge and Hurley may campaign both the Suzuki RM-Z450 and RM-X450 model machines.

“We have not decided what bikes we will be riding, and we may yet share the same bike anyway, but both models of the Suzuki are capable of winning this race, so it doesn’t really matter,” said Groombridge.

“Whatever we decide to ride, I’m sure we’ll be competitive.

“I’ve been doing quite a bit of riding lately, so my fitness is good but it’s a different race to prepare for. We’ll need to have spare wheels and things like that on standby, but really, I just ride it like a big motocross race.

“The trick is to keep your concentration levels up. One mistake and you’re into a tree.”

Despite their own star rating, Groombridge and Hurley will come up against some heavyweight opposition, including current Woodhill Two-man Cross-country series leaders Josh Jack and Luke Mobberley, from Kaukapakapa and Muriwai Beach respectively, as well as Auckland’s former national enduro champion Chris Power, who will team up with Palmerston North’s three-time former national cross-country champion Adam Reeves.

The iconic Suzuki Six-Hour will be followed the next day by the second annual Suzuki Junior Three-Hour race at the same venue, although the riders will be traversing a different and slightly-less daunting route through the Ohakuri Forest.

The organiser of both events, Tokoroa enduro legend Sean Clarke, said Saturday’s race would really “sort the men from the boys”, although the course set out for Sunday would be “much more forgiving”.