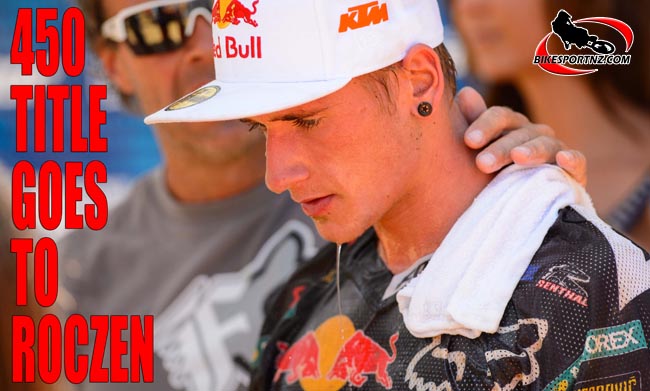 Canard ended the 2014 United States Motocross Championships on a high note at the weekend, taking the overall with a 1-1 score-line in the 450cc class at Miller Motorsports Park in Utah.

The real star of the day, however, was Germany’s Reczen, who maintained his composure throughout both motos to finish 3-4 on his KTM, taking this year’s Lucas Oil Pro Motocross Championships title in his first season aboard the big bikes.

Canard and Roczen shot to the head of the pack off the start. The Honda ace kept up a strong defense as Roczen battled to find a line to the front in the opening laps, and as the race reached mid-point Canard began to stretch a gap on the field.

After losing Canard, Roczen nearly gave Dungey the chance he needed to close the 20-point gap between the two during moto one. The German rider almost went down mid-race when he came upon some backmarkers who got tangled and hit the dirt. Roczen had to veer off track to stay upright, but he remained steady and rejoined without issue.

Near the end of the race Roczen had fight on his hands when Dungey came charging from behind, and the team-mates waged a back-and-forth battle for the runner-up spot. Dungey made his first pass stick, but then got caught behind a lapper which allowed Roczen to catch and repass the Minnesota-native. Dungey forged ahead and closed back on Roczen during the final laps, passing once again to finish in second.

In moto two, Canard ripped the holeshot a second time, leaving behind a nasty pile-up which took down Reed, Short and Canard’s team-mate, Fredrik Noren, among others. Roczen was nearly caught in the melee but slipped by unharmed, slotting into second-place.

Roczen pressured Canard hard through the initial laps while Dungey was pushing up the ranks behind to settle into third. After about 10 minutes Dungey had caught Roczen, and quickly made the move to second-place.

Running order out front stayed steady until the second-half of the contest, when Tomac closed the gap on Roczen and passed for the final step on the podium. Roczen kept out of any battles, knowing the title was secure with a fourth-place finish.

Metcalfe took fifth followed by Rockstar KTM’s Ryan Sipes in sixth and RCH Racing’s Weston Peick in seventh. Grant’s team-mate, Justin Brayton, finished in eighth followed by Noren, who remounted at the back of the pack after his off at the start, in ninth.

Roczen walks away with the championship 14 points ahead of Dungey in second. Canard finishes the season in third followed by Metcalfe in fourth and Tomac in fifth.

Meanwhile, in the 250cc class, Yamalube Star Racing’s Jeremy Martin secured the 2014 Nationals title at the previous round in Indiana, but staged an aggressive performance at Miller Motorsports Park anyway, going 1-1 in dominant fashion.