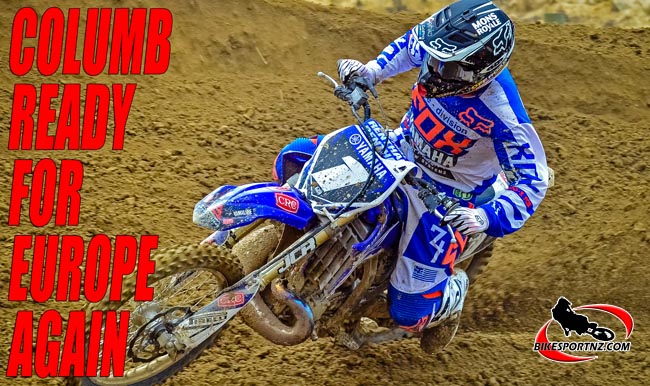 Central Otago’s Scott Columb knew the day may have been coming and he’s been preparing for it.

The 30-year-old from Queenstown, a key member of the Altherm JCR Yamaha Race Team in New Zealand, was given the call-up this week to captain Team New Zealand at the “Olympic Games of motocross” and he says he’s “over the moon” about the news.

It seemed as if New Zealand was leaving things a little late in naming its three-rider squad for the big annual Motocross of Nations (MXoN) – set this year for Kegums, in Latvia, in just over a month’s time, on September 27-28 – but that didn’t worry Columb because he’s been training hard for the event since July and now he is bursting to go.

“Put it this way, I haven’t just been sitting around on the couch,” said the former national champion.

His young team-mates in Latvia will be Warkworth’s Hamish Dobbyn and Takaka’s Hamish Harwood and together they form a strong unit.

CMR Red Bull KTM Team riders Harwood and Dobbyn are MXoN rookies, but Columb knows exactly what to expect, having raced previously for New Zealand at the MXoN in Donington Park, in England, in 2008 (where the team finished 8th) and in Franciacorta, in Italy, in 2009 (where NZ finished 11th).

“It has been a few years since I last raced an MXoN event,” Columb conceded, “but I’m ready to go. It’s a huge honour to be picked and I knew it would be a possibility after (national MX1 champion) Cody Cooper picked up an injury.

“It’s going to be a bit of a mad rush now to finalise all the bits and pieces, but we’ll be sorted. I’ll be riding the Yamaha YZ450 for the team and I’m pretty happy about that.

“I will be racing the YZ450F in the MX1 class at the upcoming nationals here in New Zealand, so I’ve done a bit of riding on the bike. I’m 100 percent fit and I feel great.

“I lived in Europe for a few years when I raced the world championships, so I’m no stranger to the scene over there.

“I don’t know anything about the track in Latvia, but I don’t think many riders do. It’s a new venue, so it will be the same for everyone.”