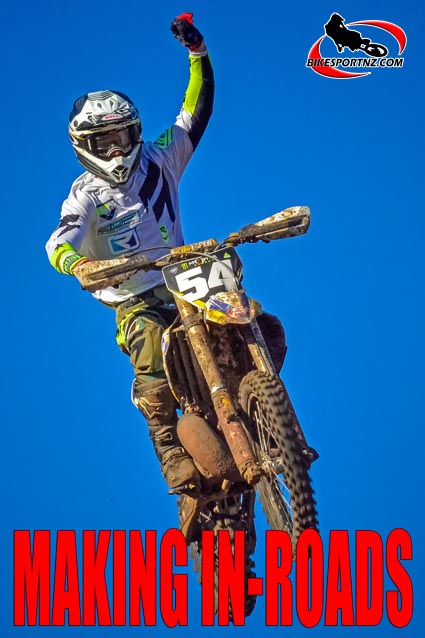 Husqvarna’s Luke Arbon continued his dominating form at the weekend, taking the overall win in the MX2 class at round eight of the 2014 Australian Motocross Championships at Raymond Terrace, New South Wales, while the Kiwi heroes had a tough time of it.

Mangakino’s Kayne Lamont crashed out during qualifying (earlier story HERE) and, with a broken collarbone, will be out for the remainder of the Monster Energy MX series, while it was a mixed bag for Dargaville’s Hamish Dobbyn and really just an afternoon of solid and steady riding from Takaka’s Hamish Harwood.

Dobbyn finished 1-5-DNF for the day, while Harwood managed 5-6-9 results.

Privateer Arbon (pictured here) lodged a 9-1-2 score-card to wrap up his second MX2 overall win for the 2014 season, and holds his position of third overall in the MX2 Championship, albeit still 11 points behind Kiwi charger Harwood (CMR Red Bull KTM).

Fellow privateer, Tune Tech KTM’s Kale Makeham had a breakthrough round finishing second, fourth and fourth to land him second spot on the podium for the day, while Serco Yamaha’s Jay Wilson, took third overall for round eight (seventh, second, third).

Moto one saw the SD3 Husqvarna two-stroke of Arbon take the holeshot on a two-stroke suited start straight and move into a comfortable lead.

Behind Arbon was New Zealander Dobbyn (CMR Red Bull KTM), who had been absent from the MX Nationals since Wonthaggi, followed by Makeham and fellow KTM rider Luke Reardon.

By lap two, Dobbyn confidently made the pass on Arbon and moved into the race lead, surprising onlookers with his confident form.

Following Arbon, and desperate to increase his championship lead was Yamaha backed Clout, while Reardon who was sitting in sixth position, was handed a 10-second penalty for cutting the track which saw him relegated to ninth, all in a matter of two laps.

By lap four, race leader Dobbyn was already into lapped riders, while Clout put in two fast laps which saw him hot on the tail of Arbon and pushing hard for second position.

Privateer Makeham managed to make the pass on Penrite Oil Honda’s, Josh Cachia by lap five, and move into a comfortable fourth position behind Clout in third.

By lap six, Clout managed to blow past Arbon and move into a commanding second position, all the while searching for race leader Dobbyn.

With the final stages of the moto approaching, Clout accelerated to the rear of Dobbyn, however ignition issues saw the red-plate holder shaking his head over the finish line as the last-lap board was thrown in front of him.

With one lap to go, Dobbyn continued on with his lead, while Makeham managed to get around Clout who was visibly having bike issues and consequently fading dramatically.

Arbon, who was passed by Makeham on lap nine, made contact with a lapped rider which saw him and his bike go down, and incidentally saw him drop from fourth to ninth position.

After months away from the national circuit, KTM supported Dobbyn put in an astounding performance, taking his first race win for 2014, followed by Makeham in second, Clout taking third, and Cachia and Harwood finishing moto one in fourth and fifth respectively.

In the second moto of the day, it was the Husqvarna machine of Arbon, who again launched off the start gate and grabbed the holeshot ahead of Wilson, and Instant Security KTM’s Brenden Harrison.

The first turn proved nasty for some – Cachia who took fourth in moto one, connected with two other riders which saw him attended by Racesafe and unable to finish the moto.

After missing the first turn pile up, Arbon again took a commanding lead and by lap two was sitting comfortably ahead of Wilson, Harrison, Dobbyn, Luke Reardon and Clout.

A 10-second penalty for cutting the track was handed to round seven winner Caleb Ward, which saw his position drop dramatically and out of winning contention.

Makeham, who also successfully made the pass on Reardon, had just started to put the pressure on Clout for fifth, when bike issues began to affect the MX2 red plate holder once again.

With unresolved mechanical issues, Clout’s frustration was evident – Makeham managing to get by the series leader and move into fifth.

At the halfway mark, race leader Arbon continued to hold off Wilson who was beginning to come under pressure from Harrison in the fight for second place.

By lap seven, Clout’s bike was again failing him, dropping another two positions into seventh and visibly lacking power.

When the chequered flag flew, Arbon took a dominating race win, ahead of Wilson in second, Harrison in third, followed by Makeham and Dobbyn who concluded the moto in fourth and fifth respectively.

Clout managed to salvage a mere 11th place finish in race two, which saw him desperately clutching at his championship with only one moto to go at Raymond Terrace.

It was the final moto of the day, where Clout managed to kick out the mechanical problems and stamp his authority on the Motul MX2 Class championship.

After the holeshot went to privateer Errol Willis, Clout looked to move into the lead early, applying the pressure on Willis and staying within a bike length of him after lap one.

By lap two, Clout passed Willis and moved into the lead, followed by Arbon, with Wilson sitting in fourth.

For moto one winner Dobbyn, the third race of the day proved the toughest, pulling into the mechanics’ area and forced to DNF after coming off just two laps in.

By the halfway mark, Clout had extended his lead on Arbon and had set himself up for redemption. Wilson too had managed to get by Willis and sat in third position with 10 minutes remaining.

With most riders settling into their individual races, there was little change in the order of riders from the halfway mark, to the last lap board.

Coming into the last turn, Clout began to celebrate – knowing all too well his championship and red plate were safe with a race win under the belt.

For privateer Arbon, race three saw him get the job done, take a comfortable second position and was handed top spot on the podium for round eight.

A late charge from Makeham meant Wilson had to fight for his position all the way to the chequered flag, but held onto third long enough to cross the line and secure his spot on the podium.

In the outright championship standings, despite the terrible start to his day, Clout managed to extend his lead to 28 points, with Harwood remaining in second, and Arbon a further 11 points behind.

The series will now head to Gladstone in Queensland for round nine, which takes place on August 24.

Championship Standings after 8 of 10 rounds: