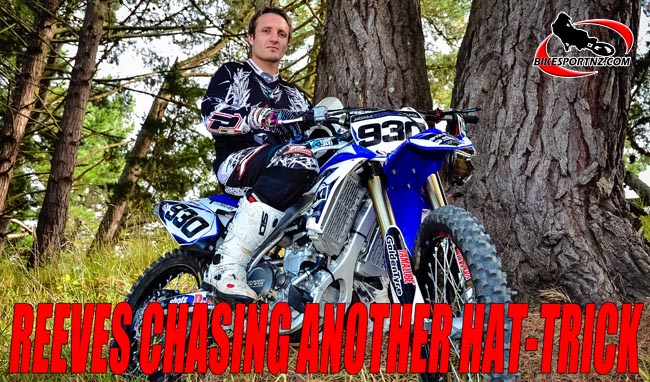 He’s a three-time former national cross-country champion and now Palmerston North’s Adam Reeves want to make it a hat-trick of wins in a different competition.

Riding solo, the 32-year-old Yamaha ace won the ironman category of annual Woodhill Two-man Cross-country endurance race in 2012 and again last year, and now he has plans to make it three ironman wins in a row in the Woodhill Forest, near Auckland, this Sunday.

“It’s a three-hour race and I figure, though plenty of riders team up to do it, I’m driving all the way up to Auckland from the Manawatu and why would I want to do that and team up with somebody just have 90 minutes on the bike?

“If I’m going that far, I might as well have a three-hour ride.

Reeves will make the journey with Wairarapa rider Reuben Vermeer, who will ride a similar Yamaha YZ450F top Reeves’ bike, and they will each tackle the event as solo riders.

“I’m racing the Dirt Guide Cross-country Series final round (near Tokoroa) the day before and I know it’s a big ask to then tackle a three-hour race the next day, but I think I’m up to it,” said Reeves.

“I love racing the Woodhill event. It’s one of the best races in the country and well worth the trip and If I’m enjoying an event, I usually ride well.

“Ideally I should have a bigger fuel tank fitted to the bike, but I haven’t and that means I might need to stop for refuel every lap. I guess I’ll just have to ride faster that everyone else.”

Reeves has a busy time ahead with plans to tackle the big annual Acerbis Four-Hour race near Taupo, again as an ironman, in November, and the Suzuki Six-Hour Dirt Bike Challenge near Whakamaru in October.

“I’ll have a team-mate for the six-hour race, but I haven’t yet worked out who that will be.”