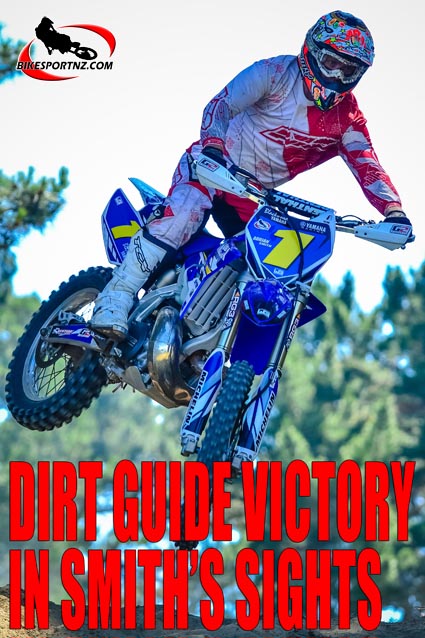 As amazing as it may sound, the popular Dirt Guide Cross-Country Championships are now into their seventh year and yet four-time national cross-country champion and current New Zealand No.1 Adrian Smith has never won it.

The reason for that is probably because the Yamaha ace has not in the past been able to complete a full campaign because of clashes with dates involving other competitions that he tackles.

But it’s a different story this season and the BikesportNZ.com Yamaha YZ250 rider is determined this weekend to add the Dirt Guide series crown to his list of high-profile sporting scalps.

The 28-year-old Awakino Gorge sheep and beef farmer won the opening round of the 2014 Dirt Guide Cross-Country Series near Tokoroa in May and finished third overall at round two last month.

Smith’s nearest challengers have been Aucklanders Sam Greenslade (Kawasaki), five points behind Smith, and Chris Power (Yamaha), 14 points down on Smith as the riders head to Ohakuri, near Atiamuri, for the third and final round this Saturday.

Taupo’s Greg De Lautour (Beta) won round two of the series but a troublesome day at round one left him down in 42nd position overall and so his chances now of finishing the series on the podium look very remote indeed.

“My main focus, I suppose, will be to beat Sam Greenslade on Saturday. He’s my biggest threat,” said Smith.

“I’ve never won this competition before and it would be nice to get my name on another trophy that’s for sure.

“It’s been a pretty good year for me, but winning this series would make it even better,” he laughed.

The same venue at Ohakuri will host a trail ride on Sunday.

No Motorcycling New Zealand licence is required to race in the Dirt Guide series.

The senior race starts at 12.30pm, with the Expert grade starting first and the Intermediate grade riders are set off on their separate race about 30 seconds later.

Series organiser Sean Clarke, from Tokoroa, said the Sunday trail rides were also proving to be very popular and were another great opportunity for novice riders to sharpen their skills.