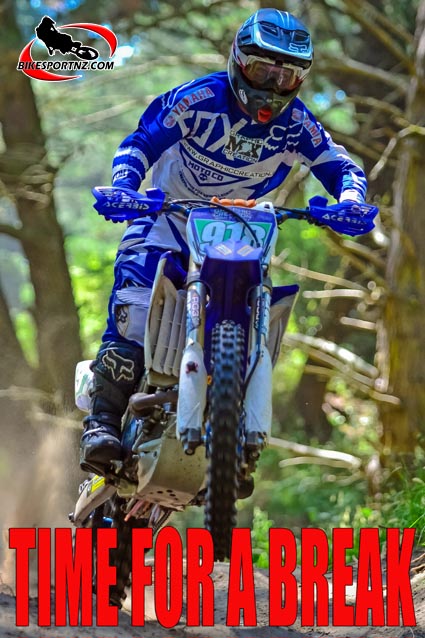 New Zealand motorcycle heroes Paul Whibley and Callan May found the going tough at round nine of 13 in the Grand National Cross-country Championships (GNCC) in the United States at the weekend.

Pahiatua’s Paul Whibley continued to push for the top spot in the XC1 Pro (open) class and Titirangi’s Callan May fought for glory in the separate XC2 (250cc) category, the two BikesportNZ.com Yamaha riders doing enough to remain in touch with their respective championship leaders.

The Snowshoe event was particularly difficult for the young Aucklander.

“Snowshoe was another extremely tough race,” said May. “We got there on Friday afternoon and a thunderstorm came in with torrential rain, making the track muddy wet and the rocks very slippery. The venue was one of the best yet up on Snowshoe Mountain ski resort, with lots of people coming up to watch with an awesome atmosphere.

“The race starts on the main road of the resort. Unfortunately due to an unlucky draw I had to start in row 10. This would make me have to catch up to the other XC2 class riders that started in front of me.

“The first half of the race went well until I hit a rock. It didn’t cause me to crash but it put a hole in my clutch cover, so my bike lost all its oil. I’m not sure how, but the reliable Yamaha finished the race, going for another hour with no oil and barely any water.

“I rode carefully and took it easy on the bike in the second half to make sure we would get the bike home. I finished in 13th not the best result but we got the job done and the hardest race out of the way.”

The GNCC series now takes a break through the worst of the mid-summer heat and resumes with round 10 at Unadilla, New York, on September 7.

“I’m now flying home this week for the summer break,” said May. “I’m looking forward to catching up with everyone back home.”