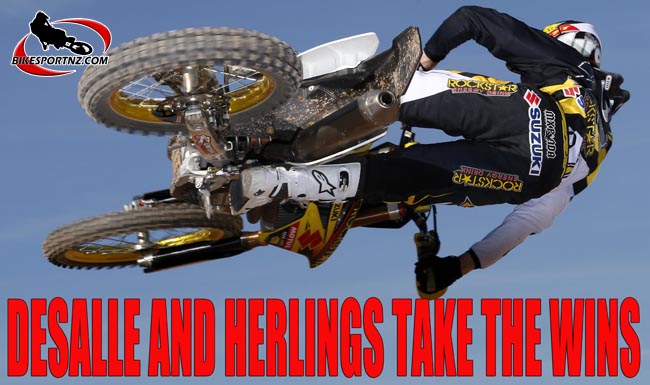 The historic circuit of Teutschenthal, the venue for last season’s Motocross of Nations, is one of the roughest on the Grand Prix circuit and so to win at the weekend’s German GP was truly a great achievement for Belgium’s Clement Desalle and Dutch rider Jeffery Herlings.

While the standing ovation went to local rider Team HRC’s Max Nagl when he won the first race of the premier MXGP class, it was Rockstar Energy Suzuki World’s Desalle who took the overall victory at round 11 of the FIM Motocross World Championship, with Red Bull KTM Factory Racing’s Herlings dominating in MX2.

Rockstar Energy Suzuki World’s Clement Desalle’s brutal crash at MXGP of Maggiora last weekend shook him up but clearly didn’t get him down. Lining up today in Teutschenthal, the Belgian used his typical poised and super smooth style to claim his fourth MXGP overall this year with his second and first place finishes.

“I am really happy with this result because I didn’t get to ride in the week after I injured my hand in Maggiora after my big crash last weekend. On Wednesday my hand was still big so I couldn’t ride, but I felt good today and I could win, so everything is good.”

After an eight week hiatus due to an unpreventable accident where an amateur crashed in front of him while training, the local legend Team HRC’s Max Nagl defied the odds, claiming second overall at his home Grand Prix. There is not one person who couldn’t help but smile for the humble German when he put in an awe-inspiring performance to claim the first race victory, but unfortunately his chance at the overall came undone after a terrible start in moto two.

Nothing less is expected of ‘Mr Consistency’, Yamaha Factory Racing’s Jeremy Van Horebeek than yet another podium. Third place here in Teutschenthal makes it ten in a row for the Belgian who mentioned in the press conference he had spent the week resting due to sickness.

Meanwhile the other of Rockstar Energy Suzuki World’s dynamic duo, Belgium’s Kevin Strijbos, had more or less and up and down weekend. A tangle in race one saw the Belgian only work his way to seventh after struggling to find his rhythm, but come race two, his mojo was back and so was his flow, allowing him to round out the weekend with a second place finish for fourth overall.

It was ‘bad’ weekend for Red Bull KTM Factory Racing’s Antonio Cairoli as he battled a virus to take a respectable fourth and fifth place finish for fifth overall. The reigning champ still holds onto the red plate, leading the championship by twenty-five points on Clement Desalle. 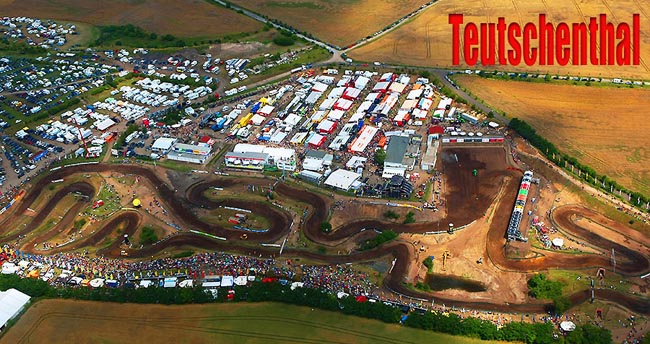 It doesn’t matter what type of surface the race delivers, there is no stopping Red Bull KTM Factory Racing’s Jeffrey Herlings. Even a fall in race one, proving ‘The Bullet’ is in fact human, wasn’t enough to slow the nineteen-year-old motocross sensation down. A twenty-one second lead in race one after crashing a few laps in, followed by a whopping forty-one second lead in race two, the Flying Dutchman dominated once again to claim his first ever win here at the German circuit of Teutschenthal.

A stand out performance for the guy named as MX2’s ‘next big thing’, Honda Gariboldi’s Tim Gajser claimed two convincing second place scores which he celebrated with a huge whip over the finish line. At just 17 years of age, the humble Slovenian said “I tried to follow Jeffrey but he was too fast, so I was two times second and I am happy because usually I have one bad race and one good race but today I was really good in both races, so I just want to keep going.”

Although Red Bull KTM Factory Racing’s Jordi Tixier didn’t have anything for the top two this weekend, the young Frenchman looked to have upped his intensity nonetheless. Keeping his bike low to the ground while wheeling through the waves, he made a series of impressive passes which took him to third in race two. His third place combined with his fourth place finish in race one was enough for him to stand on the third step of the podium.

Another star on the rise Standing Construct KTM’s Valentin Guillod didn’t get off to the greatest of starts this weekend but the Swiss worked hard and pushed forward to wrap up sixth in race one and rounded out the weekend with an impressive ride for fourth in race two landing him in fourth overall.

Meanwhile the kid with the heart of a lion, Wilvo Nestaan Husqvarna Factory Racing’s Romain Febvre fought his way home for a fifth and a sixth in the races to round out the top five in MX2.