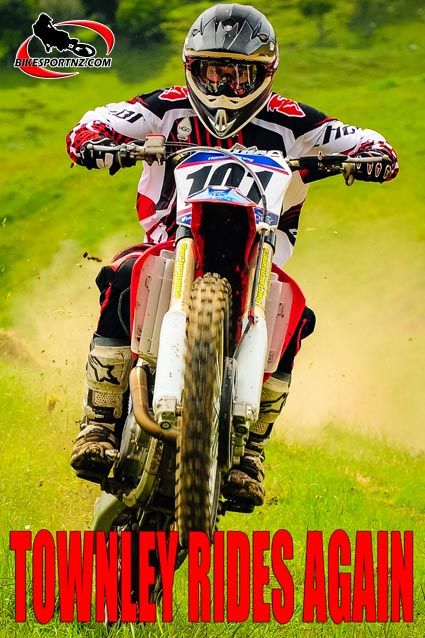 Former MX2 World Motocross Champion Ben Townley will return to the Penrite Oil Honda Racing Team to contest the MX1 class at this weekend’s fifth round of the Australian Motocross Championships at Perth’s Wanneroo circuit.

The 2004 world MX2 champion from Taupo will replace fellow New Zealander Cody Cooper, who injured his knee in an on-track incident at round four at Murray Bridge last weekend.

Cooper will undergo an MRI and further tests early next week to determine the full extent of his injuries and a rehabilitation program.

Townley, who retired from full time competition in early 2013 will also contest the Manjimup 15000 with the factory Honda outfit and said he is looking forward to racing in his first national in nearly two years.

“I was there when Cody got hurt and it was really disappointing as he was in a good position to take the overall,” Townley said. “I am looking forward to racing this weekend and while I haven’t raced a national in two years, I am still riding and it will be fun to get out there.

“The team has always been there and supported me during my setbacks so I wanted to return that support. I will race Wanneroo and then we will head down to Manjimup for the 15000,” Townley added.

Penrite Oil Honda Racing Team Manager Mike Landman said the team was excited to have Townley fill in for the weekend.

“We are all bitterly disappointed for Cody as he was riding really well before the crash,” Landman said. “We appreciate Ben’s support look forward to having him back on a bike at this weekend’s Perth round of the MX Nationals.

“There are no expectations on Ben as he hasn’t raced a national in over two years. He is a fan favourite and still enjoys riding his motorcycle so we are very happy to be working with him again,” Landman continued.

Josh Cachia will be back on track in the MX2 class and is hoping to make further inroads on his return to peak fitness.

The Penrite Oil Honda Racing Team will contest Round five of the MX Nationals at Wanneroo Motocross Track before heading to the Cosy Creek Motocross track for the 2014 Manjimup 15000.