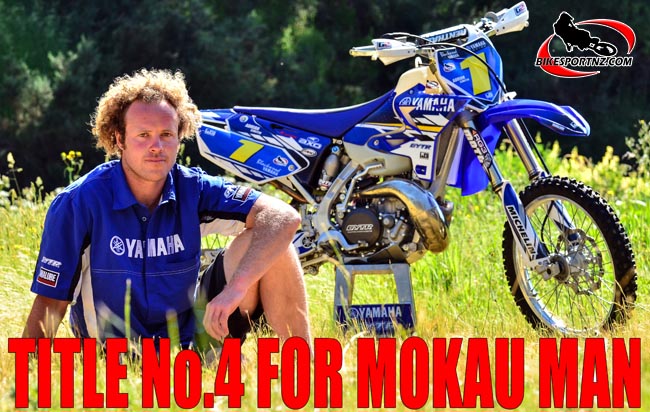 Mokau’s Adrian Smith made New Zealand motorcycling history on Saturday when he rocketed to a record fourth national cross-country title.

The Yamaha off-road motorcycle ace headed down to the fourth and final round of the championships near Ward, south of Blenheim, with one thing on his mind – “to ride smart and wrap up the overall win”.

The 28-year-old won his first New Zealand cross-country championship crown in 2006 and was outright winner again in 2012 and last year too, and he headed to Marlborough’s final round on Saturday with a clear points advantage to make it title No.4 and three in a row.

But, while a sensible, low-risk approach would get the job done, that’s not really in Smith’s nature or style.

He won Saturday’s three-hour race from main rival Ethan Bruce (Yamaha), the young man from Maruia able to keep Smith honest through most of the race, until a slick fuel stop from Smith before the last stint gave the Awakino Gorge sheep and beef farmer the break he needed to ditch Bruce and eventually take a comfortable win.

Bruce finished runner-up and nailed down the No.2 spot overall for 2014, while Taupo’s Brad Groombridge (Suzuki) held off Rotorua’s Scott Birch (Honda) and Raglan’s Jason Dickey (Kawasaki) to claim the third podium spot on Saturday.

However, Dickey’s fifth placing was enough for him to secure the No.3 spot for the championship.

Meanwhile, Waipukurau’s Ben Fryer (Yamaha) had wrapped up the junior class titles with a round to spare at the previous round, although that didn’t stop him pushing hard in the 90-minute junior race staged earlier in the day.

The final championship rankings had Fryer on top, with King and Wightman second and third respectively.

Motorcycling New Zealand cross-country commissioner Chris Smyth said he was thrilled with how the series had gone.

“Everybody seemed to enjoy it,” said Smyth. “The track was really well watered by rain leading up to Saturday’s races and so dust was not a problem. Northern Accessories provided extra sponsorship for the final round and that was greatly appreciated too.

“All four host clubs did a wonderful job this season and the series was a real success.”

Check back here on www.BikesportNZ.com later this week as we bring you an interview with Smith.