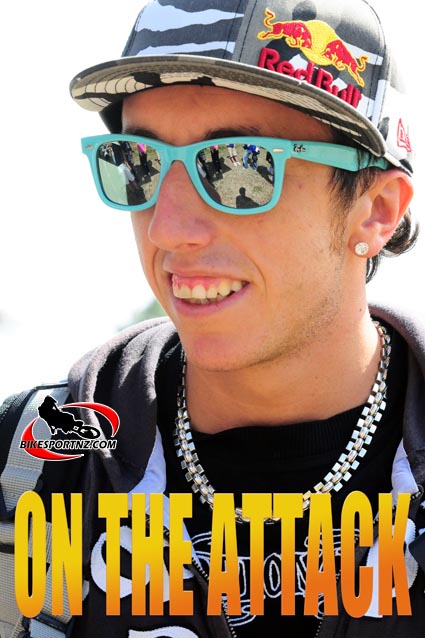 Bags of ice were as valuable and as rare as bags of gold at round two of the FIM Motocross World Championship in Si Racha, Thailand, at the weekend.

Hot and humid, the riders were up against it with temperatures soaring well above forty degrees in direct sunlight.

Meanwhile the organisers and track management crew were also faced with a challenge and did an outstanding job keeping the dust at bay, with more than 50,000 litres of water being sprayed out over the day.

Despite the testing climate it was a slight bout of déjà vu as both Red Bull KTM Factory Racing world champions Antonio Cairoli and Jeffrey Herlings took home double victories for the second consecutive year.

The rougher the better for Red Bull KTM Factory Racing’s Antonio Cairoli, and the challenging circuit in Si Racha didn’t fail to deliver.

Putting his incredible repertoire of dirt bike skills on full display for the world to see, Cairoli took his Red Bull KTM Factory Racing KTM 350SX-F to an outstanding double victory for the second year running. At the next round of MXGP in Brazil, Cairoli, the new MXGP points leader, will be running the red plate.

“My bike was doing strange, so sometimes I missed the jumps and lost some seconds. I don’t know what the problem was, in the first race my bike was great and I think it was hotter in race one, so I don’t know, but now in race one I had a good sensation on the bike, so it’s good.”

Standing on the third step of the podium, thanks to two third place finishes, Yamaha Factory Racing’s Jeremy Van Horebeek has improved leaps and bounds since last year.

The young Belgian is only on his second year in the MXGP class and is proving he can already foot it with the seasoned vets when he took the Fox Head holeshot in race two and held off the legend Antonio Cairoli for the first twelve minutes. Although Cairoli ended up finding a way through, Van Horebeek managed to keep a cool head and finished the race safely in third.

The FIM Motocross World Championship opening round runner-up Max Nagl had to fight hard for his result today.

The German started both races well outside of the top ten, making his hopes of a podium finish very difficult. Nevertheless, Nagl’s fighter spirit and great line selection skills paid off as he moved fluidly through the field to take sixth in moto one and fourth in moto two for fourth overall. Nagl remains second in the MXGP Championship standings.

The MXGP red plate holder Monster Energy Kawasaki Racing Team’s Gautier Paulin had a day of ups and downs. In race one, the Frenchman’s start was not very good but he managed to find his flow and push through the pack to claim fourth. In race two, Paulin got off to a great start coming around turn one in fourth.

After battling hard the entire race, his result was sabotaged as his bike struggled in the heat. Fortunately he managed to crawl home for ninth, which was enough to give him fifth over all for MXGP’s round of Thailand but dropped him back to third in championship standings.

During MXGP race one, in a battle for fourth, CLS Kawasaki Monster Energy’s Tommy Searle came up a meter too short on the biggest jump of the track, which ended in disaster for the Brit. The impact was so hard that the forks of his CLS Kawasaki were completely destroyed and the rest of his bike wasn’t looking much healthier either. While the official report of his injuries has not been released, his team has confirmed it is a suspected broken wrist.

Red Bull KTM Factory Racing’s Jeffrey Herlings appeared to be back in his expected form this weekend in Thailand.

The current FIM MX2 World Champion amazingly took the Fox Head Holeshot in moto one, and went on to dominate in typical Herlings style.

In race two, Herlings was off to another good start, moving into second before the third turn with only Max Anstie in front. Although Max Anstie did a great job at leading the first half of the race, it wasn’t long before Herlings found his rhythm and passed Anstie to win his second race of the day by plus eight seconds.

Rockstar Energy Suzuki Europe’s Glenn Coldenhoff had a great start in race one, sitting on the tail of the top three for the first half of the race. Upon reaching midway, Coldenhoff was on his second wind as he spectacularly scrubbed past Jordi Tixier and Dylan Ferrandis to take second.

In race two, Coldenhoff was just as good, although the heat seemed to play a factor in his ability to push the entire race. Nevertheless, Coldenhoff soldiered on to finish 2 – 4 for second overall, which moved him up to third in the championship standings.

If there was any “what if’s” floating about after BikeIT Yamaha Cosworth’s Max Anstie’s horrendous stroke of bad luck in Qatar, they were somewhat answered today when he took the Fox Head Holeshot in race two.

Anstie did an outstanding job keeping Red Bull KTM Factory Racing’s Jeffrey Herlings at bay for the majority of the race, but unfortunately as soon as Herlings had found a way around, he was forced to settle for second. With a sixth place finish in race one and second in race two, Anstie took his first podium place of the year (third).

On getting sixth in race one Max said, “I don’t know really, I just go out to ride my laps and if I finish fifth or fifteenth, its all the same, I don’t think about it, I just ride my laps but it is nice to be at the sharp end of the field”.

Wilvo Nestaan Husqvarna Factory Racing’s Romain Febvre didn’t have the best start to the day when he hit the deck a couple of times in race one. In impressive fashion the Frenchman redeemed himself in race two with a remarkable climb from outside the top seven to claim third, leaving him in fifth overall for the Grand Prix.

Meanwhile Team One One Four’s Livia Lancelot, the only girl to contend in the MX2 this season, toughed it out on the gnarly circuit of Si Racha to take her first FIM MX2 World Championship point. Lancelot said, “I didn’t feel so good out there in the heat, and the track was really tough with the big jumps. At one point I didn’t really want to jump anymore and I was thinking about giving up. But my mechanic told me to never quit and encouraged me to finish the race. Thanks to a lot of other guys quitting, I got my first point and I made history, so I am happy with this result”.

Contributing to the extra special atmosphere here in Thailand, the Thai organizers hosted a stunning opening ceremony with traditional Thai dancers and instrumentalists. Youthstream President Mr Giuseppe Luongo, FIM/CMS Director Dr Wolfgang Srb were both guest speakers during the ceremony where they expressed their thanks to all supporters, public and people involved in the MXGP round of Thailand, for their help in contributing to the growth of motocross. Mr Luongo rounded out his speech with “Thailand, we look forward to seeing you again next year!”