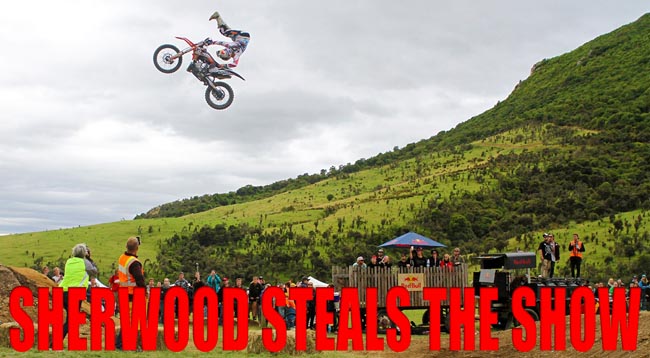 More than 2000 Southland fans witnessed some of the most incredible riding New Zealand has ever seen, as Kiwi FMX hero Levi Sherwood, Australian BMXer Brandon Loupos and the British MTB rider Matt Jones saw off some stiff competition to claim the 2014 Farm Jam crowns.

Palmerston North’s 2012 Red Bull X-Fighters champion Levi Sherwood, who spent several days this week reshaping and evolving the FMX course, was at his mind-bending best in the FMX competition. Just 10 days before he flies to Mexico for the first round of the 2014 X-Fighters, Sherwood flipped obstacles previously deemed impossible and threw the biggest tricks in the book as he fought off defending champion Nick Franklin (second), Brazilian Fred Kyrillos (third) and Australians Ryan Brown and Truman Carroll.

“I’m pumped to have won, and am definitely surprised at how well everything panned out after yesterday’s rain,” Sherwood said afterward. “I felt like I had to really push it to beat these guys today. Some of the tricks I threw I normally would never do, even at some of the biggest comps, and that says a lot about the level of competition this year.”

The intensity in the hugely popular BMX contest elevated to a whole new level in 2014, as Brandon Loupos landed Farm Jam’s first 1080 spin, a Cash Roll Tailwhip and some huge combos on his way to the win over Kiwi charger Paul Langlands (second), American Mike “Hucker” Clark (third), and Australians Dany Campbell  and Boyd Hilder. Fresh off the plane from Russia, the Nitro Circus Live star was beaming from ear-to-ear after claiming both the BMX and Best Trick awards.

“I flew from the other side of the world to get here, and to ride with my best friends and come on top is the best feeling ever,” Loupos says. “I don’t think anyone has a contest this big in their backyard and to put on something like this is amazing. It was definitely one of the best sessions I’ve ever done.”

“The Farm Jam is insane; everyone has a smile on their face, but the runs were really impressive,” Jones said afterward. “I’m blown away at how well everything ran despite the weather yesterday. The Frews do an amazing job and it was well worth coming from the other side of the world to be a part of it.”

Organisers Dan and Brett Frew had to battle heavy rain showers and hail storms to keep the event running, but rolled with Mother Nature’s punches to again deliver an event of world-class quality.

“Yesterday we faced all sorts of inclement weather, but the event staff and the riders banded together to ensure the Farm Jam was the huge success it was,” stated Brett Frew. “I couldn’t be happier with the quality of riding, the huge, enthusiastic crowd and the attitudes of all the riders. 2014 was one for the record books for sure.”