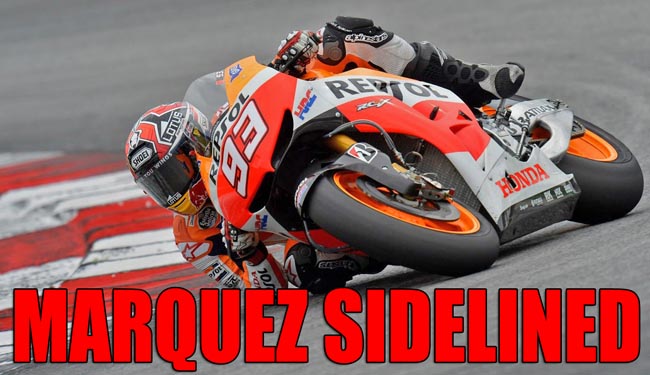 Marquez was immediately taken to the Universitario Quirón Dexeus Hospital where Dr. Xavier Mir treated what is officially described as ‘a spiral fracture of the distal third of his right fibula’.

“It was a really unfortunate accident that could happen to anyone at anytime,” said Marquez. “I was rushed to hospital and Dr. Mir treated me, thankfully there was no ligament damage and it seems like a clean break.”

Dr. Mir confirmed: “The results showed no ligament damage or dislocation and no need to proceed with surgery. I expect he will need 3-4 weeks to fully recover.”

‘Marc has already started rehabilitation with magnetic therapy’, said a Repsol Honda Team statement. ‘He will remain non-weight bearing for two weeks, meaning he will certainly miss next week’s Sepang test and possibly the following week in Phillip Island, Australia.

‘Full recovery is expected for the [season opening] Qatar MotoGP race on 23 March.’

The 21-year-old Marquez – who won the MotoGP crown at his first attempt – was fastest on all three days of the opening Sepang test earlier this month, including a new unofficial all-time lap record.

Marquez claimed six wins last season – and fought for victory to the final turn at Silverstone, despite dislocating his shoulder a few hours earlier.