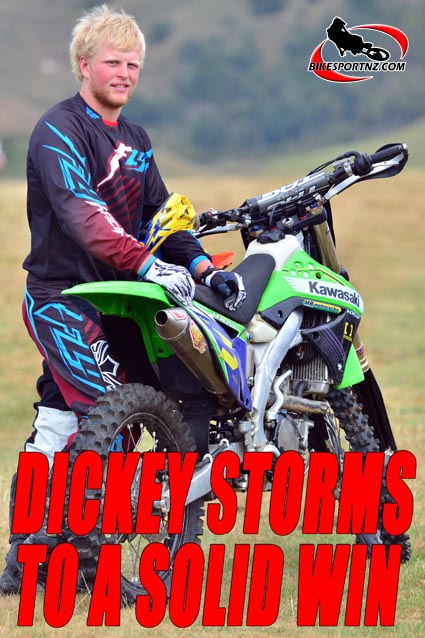 It was particularly satisfying for the Kawasaki ace from Raglan because this is one of those ‘must-do’, high-profile events on the New Zealand off-road motorcycling calendar, and a massive achievement to win against such top-class opposition.

Instead of forming a two-rider team as he did last season, national cross-country No.2 Dickey raced as an ironman contestant this time around and it seemed to pay off as he roared to a convincing eight-minute win over his nearest rival, the man who is again expected to be Dickey’s nemesis for the nationals, New Zealand cross-country champion Adrian Smith.

Mokau’s Smith, again riding his Blackwoods BikesportNZ.com Yamaha YZ250 two-stroke solo, won this event last year, but he had to bow to Dickey on Saturday.

Smith holeshot the race while Dickey found himself stuck in traffic soon after the start.

“It took me two kicks to get the bike started and that cost me a bit. I was down in about 20th place at the start,” said the 19-year-old Dickey.

“I knew I had to go hard to not let Adrian get away. I slowly picked off rider after rider and, by about seven kilometres into the opening lap, I was up on Adrian. Then I passed him and started to open out a bit of a gap.

“It was a trouble-free race … no crashes for me and it has me feeling confident with the next round of the Bel Ray Cross-country series coming up in a week or so (on February 9) and then the start of the (four-round) nationals.”

It was a Kawasaki 1-1 at the event on Saturday with Te Kuiti Kawasaki rider Sean Kelly winning the 90-minute junior race staged earlier in the day.

Scott was particularly impressive, beating so many riders on bikes with much bigger engines.

The opening round of this season’s New Zealand Cross-Championships is just over two weeks away, in Taranaki on February 16 and Dickey’s podium finish at the Raglan Rocx indicates that he’s more than ready to challenge for Smith’s No.1 ranking this season.