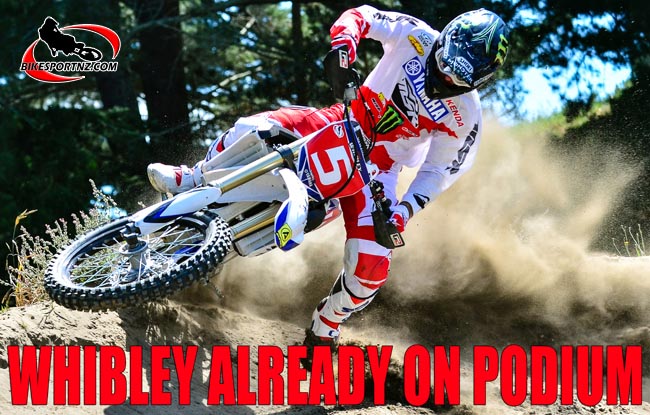 Pahiatua’s Paul Whibley picked up his new 2014-model Yamaha YZ450 just a couple of weeks ago and already he’s placed it on the top step of the winner’s rostrum.

The 35-year-old two-time former United States cross-country motorcycle champion is now back in New Zealand for the American off-season, resting, relaxing, seeing friends and family and, perhaps most importantly, gearing himself up for yet another crack at the Grand National Cross-country Championships (GNCC) in the US next season.

His first order of business was to offer his personal practice facility and his own expertise to run the second annual Yamaha Taikorea 500 cross-country challenge last month – that event sensationally won for a second consecutive year by Marton Yamaha ace Cam Smith – but now Whibley settles down to concentrate on his own riding form.

He need not have been worried because, with his training in full swing, he set about winning his first official event on the new bike, the second round of the Bush Riders’ Cross-country Championships at Makakahi, near Pahiatua, on Saturday.

“I haven’t spent a lot of time on the bike since the end of the US GNCC season and went with the set-up that we started to develop before I left the United States. I was confident the platform would work just as well when translated to New Zealand conditions.

“I practiced a couple of starts on the line and, while I didn’t have the new Vortex ECU yet, I managed to sneak in the hole shot and lead the way around the first lap.

“Morning rain combined with green grass and hard clay made the track really slick. Carefully negotiating the steep hills and dodging the sheep, I completed a lap in just over 30 minutes.

“Eketahuna rider Jacob Hislop was close behind, taking full advantage of the parted white tide of sheep. During the second lap, with a clear track, I was able up the pace and start to build a solid lead.

“(My wife) Katherine handled the pit stop. She still got me gassed up and back into the race quickly.

“I was able to put it on cruise control for the last hour of the race. Last year’s Bush Riders’ Cross Country champion Charles Alabaster (from Dannevirke) moved into second during the race. Also a young guy to watch for was Woodville’s Ben Exeter, who has shown some good speed in the past and is now beginning his training for a run at the national cross-country series, and he had moved into third place.

“By the time the flag came out, the track had dried and conditions were prime. The track had a fun mix and flow and was praised by those that rode.”

Whibley won ahead of Alabaster, with Exeter taking third spot on the podium.