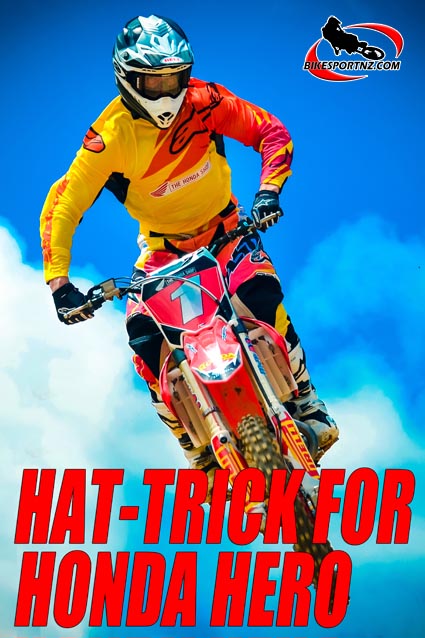 The Honda Shop Racing team is well on its way to clinching its first major title of the season.

Mount Maunganui’s Cody Cooper began his national supercross title defence in the best possible way at the opening round of the New Zealand Supercross Championships near Timaru on Sunday, launching his Honda CRF450 to a hat-trick of wins in the premier Open Class.

Cooper, who is also national MX1 motocross champion, was untroubled as he dominated the first of two rounds in the 2013 supercross championship, easily finishing ahead of Australian visitors Matt Haworth (Altherm JCR Yamaha YZ450F) and Sam Duncanson (Honda CRF450).

“I actually clinched six holeshots from six starts (in qualifying and the championship races proper), so I’ve obviously got that all dialled in at the moment.

“I was feeling very comfortable and was really only racing against my own pit board, trying to improve my times every lap. I wasn’t worried about the other riders and was focussing instead on maintaining my intensity.

“I’m really looking forward to the next round and, hopefully, to wrapping up the Open Class title again.”

Supported by Crown Kiwi and Alpinestars and managed by former motocross world champion Ben Townley, of Tauranga, The Honda Shop Racing Team heads to Winton for the second and final round this Thursday afternoon, looking to wrap up the open class supercross crown for 2013.

The high-profile Waikato-based outfit then switches back to motocross mode for the upcoming Honda Whakatane Summercross just after Christmas and the big annual Honda New Zealand Motocross Grand Prix at Woodville in late January, followed by the four-round New Zealand Motocross Championships, kicking off near Timaru in February.