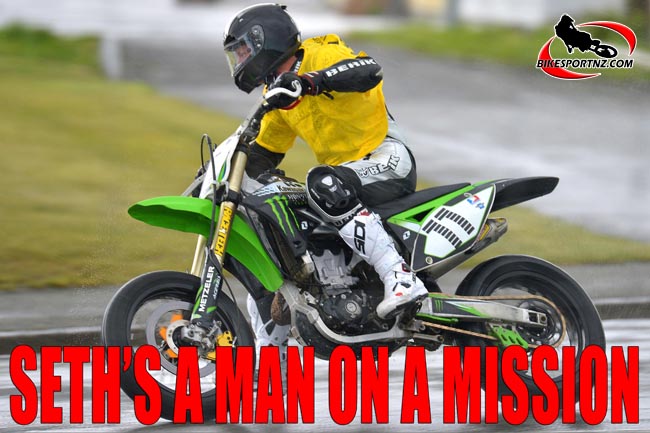 Seth Devereux has a cunning plan to boost him towards winning yet another national motorcycling road-race title and, perhaps unsurprisingly, it involves him taking a few risks.

The Kawasaki ace from Bryndwr, in Christchurch, will double up on his championship campaign this season because, as well as stepping up from the 250cc class to the 600cc supersport division, he will also try his hand at an entirely different kind of motorcycle racing, on a machine that involves a very different style of riding.

Devereux has won national titles in the 125GP and 250cc production classes and he won the 2013 600 supersport tourist trophy and he will again take a Kawasaki ZX6R to race in the 600 supersport class this season, as well as racing a Kawasaki KX450F dirt bike in the super motard class.

He figures this “cross-training” should help him to become a champion on tarmac once again, one way or another.

Devereux had his first big outing on the powerful dirt bike when he raced the KX450F in the super motard class at the weekend’s annual Greymouth Street Races, notching up a mixed bag of results but it was an afternoon that also included a memorable race win.

He finished fifth in the next race and then improved to finish third in race three – Devereux was proving himself a very fast learner.

Then, as rain fell and made the circuit even more treacherous, Devereux stunned the established super motard stars by winning race four by more than the length of the main straight.

He wrapped up his afternoon by finishing runner-up in race five, enough to earn him the John Jones Memorial Trophy as ‘super motard rider of the day’.

“Hopefully this also offers more exposure to my sponsors.”

Watch this space, because, if Devereux can notch up a win in his debut super motard outing, there’s no telling what he’ll be able to do when the season kicks off for real in the next few weeks.

“I want to thank the Bristow family for their on-going support,” said Devereux.

However, he says, he is also looking for a naming sponsor.