It is finally the end of the domestic and world championship motocross seasons and that can only mean one thing … it is Motocross of Nations time.

In case you have been living in a cave with a poor Wi–Fi signal, this year’s instalment takes place at Teutschenthal, in the former East Germany, not far from Leipzig and the World War Two ‘bad boys’ prison of war camp at Colditz Castle.

The very best of the world’s riders (along with some of the world’s very average riders for the smaller countries) will be making their way by planes, trains and automobiles to the crucible of motocross that is the MXoN (the organisers had to rebrand the event from the Des Nations as the Americans weren’t sure who Des was)

The first instalment of this prestigious event was held way back in 1947 when Bill Nicholson, Fred Rist and Bob Ray took home the honours for Team GB for the first time. Since then in the 63 annual events the British teams have won the Trophy an impressive 16 times, but it’s the Americans who have had the competition in virtual lock down since their debut at the competition in 1981, racking up a staggering 22 wins in the years that followed.

Their latest 13-event win streak kicked off in Ernee in France 2005 with Ricky Carmichael, Kevin Windham and Ivan Tedesco bringing home the bacon.

Since 2005, the US teams continued to steamroll the opposition, winning at Matterley Basin in 2006, Budd’s Creek in 2007, Donington Park in 2008, Franciacorta in Italy in 2009, Lakewood in Colorado in 2010 and St Jean D’Angely in France in 2011, before finally falling down in the deep Belgian sand of Lommel last year.

Yet the results never tell the whole story, and on many of the above fixtures, the mighty US team have been on the cusp of losing the trophy to other countries, only to snatch victory in the final moto.

In 2011 it looked like France were going to overhaul Ryan Dungey, Ryan Villopoto and Blake Baggett, right up to the point that Frenchman Christophe Pourcel’s tyre decided it would prefer to be off the rim.

At Franciacorta, in Italy, Antonio Cairoli was about to pull off a dream home win and make himself a motocross God, only to wipe out on the start straight and score a DNF.

When it comes to luck, the Americans seem to have more than their fair share.

Yet that is perhaps too simple an assessment. The US team members are so strong, focussed, tight and co-ordinated, that their wins are very well-deserved. They never give up; they seem to have a far tighter team spirit than many of the other countries.

In many ways the other secret to the US dominance is the infamous ‘third rider’ problem. For virtually every team outside of the US of A (population in excess of 314 million), countries have often been blessed one or two obvious choices from the AMA or World Championship ranks, but filling the No.3 slot leaves them struggling.

It’s not that they didn’t have good riders; they just didn’t have three that could hope for a top five position within such a stacked field.

Yet the Americans always do. Even if they hadn’t picked Ryan Dungey, Justin Barcia and Eli Tomac this time around, they could still have found three, four or maybe 10 world class riders who could take the fight to the rest of the world.

Just in case you don’t know the scoring – each rider completes in two motos, scoring points as to their finishing place – 1 for first, 2 for second, etc. Of the six scores accrued by each three-man team, the best five results are counted, with the worst score discarded.

In simple terms, the lowest team score wins the Chamberlain Trophy, but with two scores coming in the final moto, you won’t know who’s going to win until the chequered flag in the day’s third (MX1 and MX3) race.

So what’s the competition like this year? Well strangely this year, quite a few teams are able to put out three top class riders that might well give Team USA a fright.

The Americans again enter as one of the favourites, with a strong team certain to fight hard. We’ve all seen Dungey and Barcia at the MXoN, but this is the first for Tomac, and it is sure he’ll want to impress his team mates and team boss Roger ‘The Man’ DeCoster.

As one of the most exciting young riders in the AMA series, American MX2 (or Lites or 250cc class, depending on what your naming preference is) champion Tomac will be an absolute joy to watch at Teutschenthal.

Check back with BikesportNZ.com as we keep you up-to-date from the track throughout the race weekend. 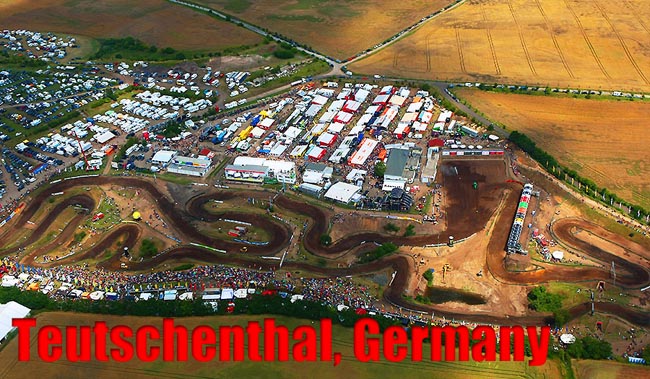