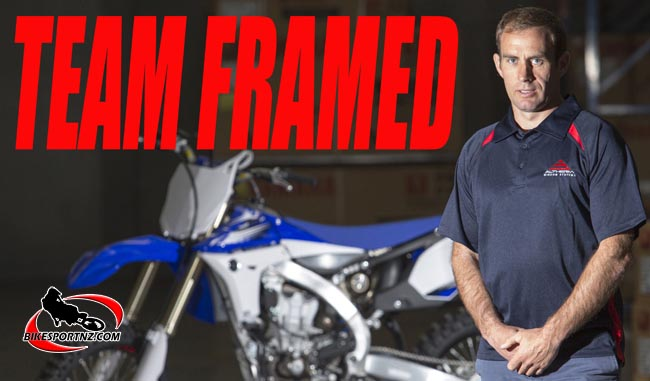 It could be described as a “visionary relationship” and it’s one that should reap benefits for both the motorsports team and the business involved.

The JCR Yamaha Racing Team is thrilled to announce this week that it’s “in the frame” and Altherm Window Systems will be their new major sponsor for the upcoming motocross season, offering a radical and exciting departure from the usual inside industry support structures.

With national MX2 champion Scott Columb, from Queenstown, proudly displaying the No.1 on his Yamaha for the 2013-14 season and his MX1 class team-mate Billy Mackenzie, from Scotland, showing the No.2 on his Yamaha, the team will move forward into the new season, doing so with a fresh impetus courtesy of the Hamilton-based window systems company, APL, which maintains a nationwide network of Altherm manufacturers.

“To be honest, though, while winning is nice, it’s not vital to this relationship,” said APL General Manager, Marketing, Shane Walden, of Hamilton.

“We believe that there is real synergy between quality brands such as Altherm and Yamaha. This is a space that we haven’t been in before, but we are very interested in growing our brand profile within the motorcycling fraternity as a lot of families ride off-road bikes in New Zealand and those same people build houses and buy windows.”

Team manager Coppins said it was “quite unique” to have sponsorship from outside of the motorcycling industry.

“I am very excited about the relationship and thrilled that they have entrusted us to help promote their window systems. It has a real ‘feel good’ feeling about it and I’m keen to show them what we can do.”

Altherm, in conjunction with the JCR Yamaha Racing Team, will be running a competition throughout the season focussed on young riders, offering the chance to go into a draw for the ultimate prize of a weekend of personal coaching with Josh Coppins at his personal training facility. This initiative looks to broaden the focus and include all families involved in the sport of off-road riding rather than focusing purely on the race scene and allows Josh to give something back to the sport.

“We will be offering tuition, to teach youngsters how to ride an off-road motorbike,” explained Coppins.

“Fostering the younger generation is just as important as managing the professionals. Altherm’s initiative is a fantastic way to provide an opportunity for those families interested in off-road riding to further their confidence and skills.”

In the meantime, if it all goes to plan for the Altherm JCR Yamaha Racing Team this season, it’s unlikely that other race teams will feel they’ve “been framed” and probably won’t get a look-in on the race track.