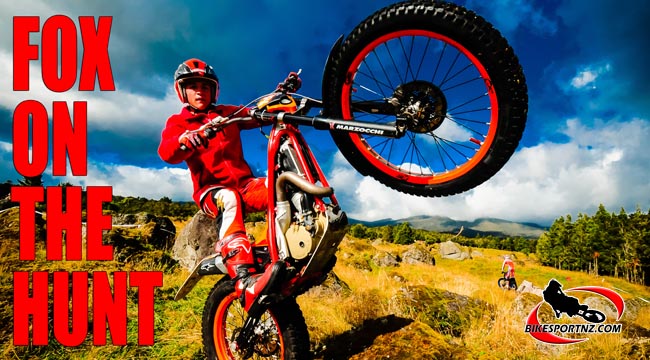 Dunedin’s Blake Fox is living the dream, riding world championship trials events in Europe, and today he gives us an update from his latest adventures.

“In the lead-up to the Penrith (UK) race I had a small event on in Germany. I had problems with my bike not running very well and this made the trial hard to ride.

“We worked on the bike late on Sunday night and George Hippel (where we had been based for the two weeks prior) found the problem. At midnight we were fixing the loose wire and testing the bike, which finally sounded good again. Monday morning after fixing the bike we headed across to catch the ferry in Calais, France. We arrived in Dover Monday night and looked around on Tuesday. We found a real castle and went inside, It was huge.

“Wednesday we found somewhere for me to test the bike and practise, called Cowm Leisure. Cowm Leisure is an old quarry near Manchester that is used for many off-road sports events and training, such as enduro, enduro-X, motocross, 4×4 and trials. It was that good that we stayed a night so that I could train there again in the morning.

“Friday morning we eventually found the venue at Penrith (for rounds 10 and 11 of the World Trails Championships) and had practise. Practise went well, the bike and I were both going great and I was looking forward to a good event. We also walked the sections and they had some large steps both up and down.

“The loop was very short, short enough that dad decided he would walk around instead riding the bike. The sections were set out in a small quarry, the rocks were grippy when it was dry and when it was very wet. But they were slippery when they began to dry, as we would find out on Sunday.

“Saturday morning I had a start time of 9:45am. My first lap was a little bit high, but I managed to bring it down on my second lap. My third lap was similar to my first and at the end of the day I tied with Timmy Hippel for 17th position. I lost the tie on a count back of number of sections cleaned and finished the day in 18th. There were more riders again at this race but I was disappointed to be so far away from the top 10. But I knew tomorrow was a new day and rain was forecast which would be good for me.

“And rain it did, Saturday night and Sunday morning till lunch time. My start time was slightly earlier on Sunday 9:40. My first lap in the rain on Sunday was an improvement on the same sections as the previous day. Lap two went wrong big time. I had six silly fails, some due to the rules that all riders are finding frustrating and others with poor riding and me miss communication with my minder (dad). I still felt confident on the bike, just silly mistakes.

“The third lap I went out with a clear head and lowered my score a little bit but not down to the first lap total. My second lap cost me positions and I knew it, I was frustrated and disappointed with my 19th position on day two.

“I am now back at my base in Spain, and tomorrow I am showing mum and dad around Pascuet Off-road and Andorra. Then they fly home and I will train for three weeks by myself. This week end I have a competition in Andorra where I maybe riding with two of my biggest idols, Jordi Pascuet (world class coach) and Dougie Lampkin (7 time World Trials Champion). This would be a huge honour and it is not set in concrete yet but I will try, and if I do I’m sure I will learn a lot. After this event I will train hard at Pascuet Offroad so I am ready to compete in France at the end of August.”