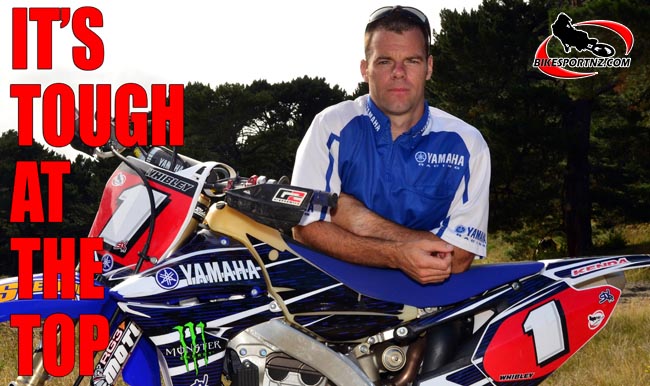 Pahiatua’s Paul Whibley is knocking on the door, but nobody is letting him in.

The 34-year-old Kiwi international has experienced another frustrating afternoon in his bid to defend one of his United States championship titles, this time at round seven of the Grand National Cross-Country Championships at Millfield, Ohio.

The former Manawatu forestry worker, affectionately dubbed “The Axeman” on the motorcycling scene, won two major cross-country titles in the US last season, clinching the GNCC and the Off-Road Motorcycle and ATV (OMA) crown as well, but his 2013 campaign to defend both titles has been fraught with difficulties.

His latest adventure was another example of a missed opportunity to capitalise on a great start.

Whibley led the way from the start of this seventh round of 13 in the series, again proving his status as one of the best off-road motorcycle racers in the world, but he was soon engaged in a tough four-way battle for the lead.

“The uphill start straight and heavy soil after some rain couldn’t stop the YZ450F from snagging the holeshot. I led the way into the woods and through the altered loop.

“Most of what I walked from the day before had been removed. The track was really slick and it was easy to see why some hill sections had to be cut out. I led about half the lap until I missed an inside line and (fellow Kiwi) Rory Mead snuck by up the inside on his 300 two-stroke bike. I returned the favour when Rory missed a similar line and I was back into the lead. The lead fell into Kailub Russell’s hands not long before we came out onto the motocross section to complete the loop.”

American pair Thad Duvall and Charlie Mullins then came past Whibley, dropping him further back and he then found himself in a battle with Australian Josh Strang.

“The racing was close and the slick nature of the track meant mistakes were easy to make,” said Whibley. “I soon closed up on the leaders again and ended up back in the lead around the midway point of the race. After the gas stop, the race to the checkers was between the top five. Late in the race Kailub and Charlie opened a small gap. Thad dropped well back after a crash and some bike problems. I held third going into the last lap with Josh right behind me. I had to stop for gas and Josh took full advantage, moving into third. I kept the heat on, but I couldn’t find a spot to make anything happen.

“I was a little gutted to end up in fourth after being in contention for a podium finish all race. But Josh, Charlie and Kailub all rode really well and deserved to be up on the box.”

Whibley is now fifth overall in the national championship standings (sixth in class), while Mead had a rough day, completing just one lap and eventually being credited with 166th place (12th in class).

The next round of the series is at Masontown, West Virginia, on June 16.

Results from round seven: