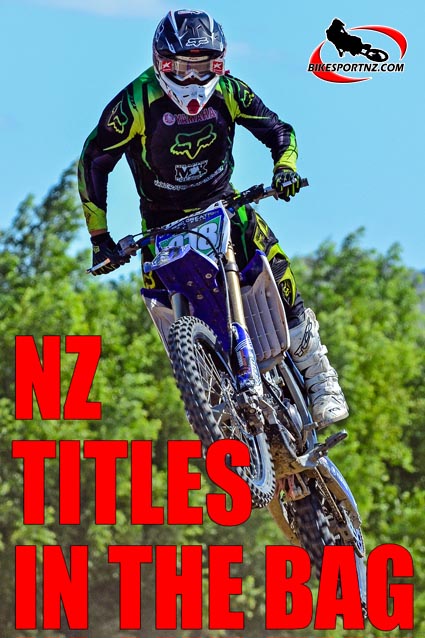 The revelation this week that Motorcycling New Zealand had been forced to cancel round seven of the New Zealand Enduro Championships has been greeted with mixed feelings.

On the one hand, many of the riders are disappointed that the Yamaha-sponsored series, originally slated for eight rounds this season, will now comprise just six events.

On the other hand, the scaling back of the championship means several riders can celebrate early, their respective titles now in the bag.

Round two of the series, set for the Riverhead Forest in March, was postponed because of fire risk and then later cancelled altogether, reducing the series to seven rounds.

Then came news this week that the original round seven of eight, which had been set for Taupo on July 20, has also now been cancelled – “due to the promoter of the event unwilling to hold this New Zealand Championship event under Motorcycling New Zealand rules” – leaving just the final round near Tokoroa, on September 21, to wrap up the championship for 2013.

One of those riders who has reason to celebrate victory is Kiwi Rider BikesportNZ.com Yamaha ace Callan May, the Titirangi man able to claim the under-300cc four-stroke class title for 2013.

May is 30 points ahead of his nearest rival for the class title, Northland Yamaha rider Mitchell Nield, and with riders able to discard their one worst result, it means that May can afford to skip the final round in Tokoroa and still claim the prize.

He rode a Yamaha YZ125 to win the national under-200cc two-stroke crown last season, but stepped up to the bigger Yamaha YZ250F this season, proving he is just as adept on that bike.

“It’s a real shame there won’t be a Taupo round this year. I really enjoy riding at Taupo,” said May.

“I’m thrilled to take the four-stroke title this year already, but that doesn’t mean I’ll be taking any prisoners at Tokoroa. I’ll be going hard-out there. I’m fourth outright at the moment and maybe I can finish as high as third, or even second.”

Auckland’s Freddie Milford-Cottam (KTM) is in an identical position to May. Milford-Cottam is 30 points clear of his nearest rival for the under-200cc two-stroke class title, Hokianga’s Damon Nield (Husqvarna), meaning he has now secured the crown this season.

Tokoroa’s Sean Clarke (KTM) is 38 points ahead of Taupo’s Mark De Lautour (KTM) in the expert veterans’ class and he had already wrapped up that title even before this week’s sad news arrived.

The only two titles still left to be decided are the two open class categories.

There are still 25 points available to the winner of each class at Tokoroa, although Auckland’s Chris Birch (KTM) is a whopping 21 points ahead of Tauranga’s Reece Burgess (KTM) in the battle for over-300cc four-stroke glory and his eventual class win seems a mere formality.

Smith (Yamaha YZ250) won the national cross-country championships earlier this season but he still has a fight on his hands to keep Davis at bay as the enduro series winds down.