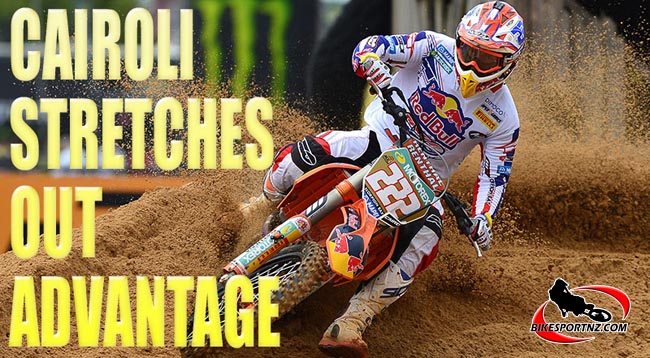 The French riders made the crowd go crazy at every single race and there actually up to three home riders on the podium, Gautier Paulin was second in MX1, while Dylan Ferrandis and Christophe Charlier were second and third in MX2.

The first MX2 race was red flagged after the start, as there was a malfunction of the starting gate, but the rest of the races were run without incident.

Ernée also hosted the second round of the EMX250 European Championship and Valentin Guillod obtained another strong victory, while Jeremy Seewer and Ceriel Klein Kromhof were second and third respectively.

In the first race the Italian obtained the holeshot, but halfway through the race Cairoli made a mistake while trying to change his line and Gautier Paulin overtook him. The KTM rider did not give up and he tried to pass the French back until the very last lap, but in the end Cairoli had to settle down with the second position. In the second race the current red plate holder took another holeshot and this time nothing stopped the Italian to lead the race until the chequered flag.

The second overall position was for Kawasaki Racing Team’s Gautier Paulin who was not able to finish on the top of the podium, but he was very pleased to win the first race in front of his home crowd who cheered for him during the whole weekend. In the second race the home rider had a really good start but in the first corner there was a crash and he was taken out to the outside. Paulin was down in sixth and he could cross the finish line fourth to be on the second step of the podium.

Rockstar Energy Suzuki World’s Clement Desalle was very satisfied for his third overall position, especially because he struggled a lot on Saturday during the qualifying race. The Belgian admitted that they made some small modifications on his bike, which helped him to feel more comfortable during Sunday’s races. In both heats Desalle had a good start, and whereas he rode a consistent first moto in the third position after he had overtaken Van Horebeek, in the second one he passed Boog after the first three laps and he rode second until the chequered flag.

CLS Kawasaki Monster Energy Pro Circuit’s Tommy Searle had one of his best performances of the season on Sunday after finishing fourth overall. The British rider started down in 12th in the first race, but he managed to finish seventh in front of Nagl with whom he had a thrilling battle during most of the race. In the second heat Searle had a much better start and he ended third, which gave him the fourth overall position, his best ever result in the MX1 class so far.

Kawasaki Racing Team’s Jeremy Van Horebeek also obtained his best result of the season today in Ernée; the Belgian rider felt really well already yesterday and today he proved that he is now ready to be among the top five positions at every Grand Prix. In the first race he was second after the start, but Paulin and Desalle were faster, so Van Horebeek decided to ride safe in the fourth place. After three laps De Dycker caught Van Horebeek and he overtook him, but with two laps to go, Van Horebeek passed him back and finished fourth. In the second race Van Horebeek was involved in a crash in the first corner and he was only able to finish sixth. However, the Belgian was really satisfied with his fifth overall position.

Ken De Dycker was back riding among the top five positions on Sunday, but he was only able to finish sixth overall. In the first heat he rode fourth most of the race, but he lost one position with Van Horebeek with two laps to go and he ended fifth. In the second moto the KTM rider was able to move up to third in the first stages of the race, but he crossed the finish line fifth again.

Red Bull KTM Factory Racing’s Jeffrey Herlings woke up with a lot of pain this morning due to the crash he suffered on Saturday during the qualifying race, so he had to take some painkillers to feel better and be able to race both motos.

The Dutch rider had two good starts and he won both heats, but he admitted that he struggled to find the good lines because every time he had to put the foot on the ground he suffered a lot of pain. Herlings will not have much time to recover, but he is already looking forward to racing in Maggiora next weekend.

Kawasaki’s Dylan Ferrandis made one of his dreams come true on Sunday by finishing second overall in his home Grand Prix. In the first race Ferrandis started third behind Herlings and Butrón, but he quickly passed the Spanish rider and he gave his best to follow Herlings.

At some point of the race, Ferrandis was really close to catch the Dutch rider, but in the end he had to settle down with the second position. In the second race Ferrandis started second behind Nicholls and the French rider made the crowd go crazy when he took the lead after four laps. However, he made a mistake and he dropped down to third, but he was able to overtake Britain’s Jake Nicholls again by the end of the heat and he crossed the finish line second.

The third overall position was also for another French rider, Yamaha’s Christophe Charlier. Charlier had a difficult first race because he started down in the 13th position, but he managed to cross the finish line ninth.

In the second race the French rider had a better start and after exchanging the fourth position with Ferrandis and Tonkov, he was able to move up to third in the last stages of the race. Charlier was very satisfied with his result today, as it is his maiden podium of the season.

It was also an excellent weekend for Honda’s Alexander Tonkov who managed to finish fourth overall in the Grand Prix of France. In the first race the Russian was only able to finish eighth after a poor start, but in the second one he made an incredible race moving from an initial ninth position to a final fourth place.

KTM’s Nicholls finished fourth overall, being tight in 31 points with Tonkov thanks to his 6-5 result. The British was riding a consistent first moto in fourth, but by the end of the race Tixier and Butrón passed him and he had to settle down with the fifth place. In the second race Nicholls had an excellent start and he took the lead in the first lap, but he could not keep the rhythm and Herlings overtook him. The British rider stalled the bike when he was riding second and he crossed the finish line fifth.

Jordi Tixier had a disappointing weekend; the French rider had great hopes for his home Grand Prix, but in the first heat he was only able to finish fourth and in the second one he made a mistake at the early stages of the race and he was down to the seventeenth position. Tixier made an excellent recovery and he ended ninth in that race, so he obtained an overall sixth position.

José Butrón, who obtained the holeshot in the first heat, struggled to find a good rhythm in the French track and he ended seventh overall. Glenn Coldenhoff ended eighth and Petar Petrov and Max Anstie completed the top ten.

Maxime Desprey and Jason Clermont, who had an excellent qualifying race yesterday, were eleventh and twelfth today, and Dean Ferris, who took pole yesterday, had a DNF in the first race due to a mechanic problem and his sixth place in the second heat made him finish 13th overall.

Romain Febvre was back this weekend from a broken fibula, but a stone hit his helmet in the first race and he was forced to retire. The home rider was not able to take part in the second heat as the impact hit his eye and nose.

Results from the French GP: