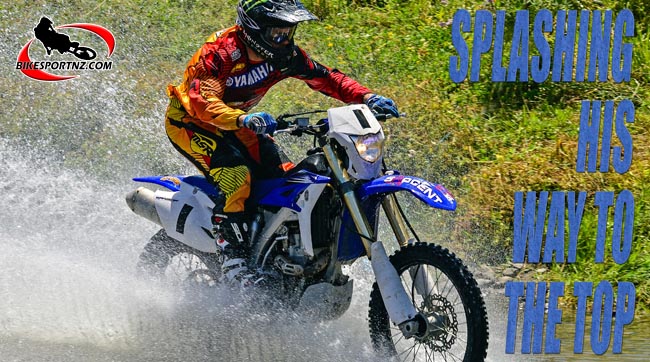 Even monsoon conditions could not slow Pahiatua’s Paul Whibley as he continued his United States cross-country motorcycle racing campaign at the weekend, winning round five of the Mid East Harescramble Championships in Hickory, North Carolina.

The 34-year-old former Manawatu forestry worker, affectionately dubbed “The Axeman” on the motorcycling scene, won two major cross-country titles in the US last season, clinching the Grand National Cross-country Championships (GNCC) and the Off-Road Motorcycle and ATV (OMA) crown as well and his 2013 campaign to defend both titles includes ‘sideline excursions’ such as the Med East series, just to keep him sharp.

“Lining up for the start the turnout was visibly less than usual at the popular ‘Airport’ round of the series. But that was to be expected with steady rain falling for the last 24 hours.

“I grabbed the start and was the guinea pig that had to lead the way through all the standing water. It was tough the first couple of laps as you try to work out which puddle is a foot deep and which is three feet or more, and where the rut lay under the water.

“Once I had a couple of laps under my belt I stopped trying to tiptoe through and began to up the pace, opening a buffer from the chasing pack. The lap was short too; just over five miles and we were quickly into lapped riders. Some were struggling and getting by wasn’t too tough although I had ditched my goggles early and the gritty roost really felt good in the eyes.

“Brakes soon began to fade as the abrasive soil was grinding on the pads at an accelerated rate.

“By the fuel stop I’m sure I was down to steel both ends.

“After gassing up, my lead grew steadily. I started to back it down a little, trying to nurse the bike home. With next to no brakes I had no choice in slowing in some spots, on the rocky downhill I had little choice in what speed I was going at the bottom, just ride it out. Some ruts began to get pretty deep and a few bikes were getting hung up and wedged in watery graves. I would try to remember what rut was deep from the lap before and avoid it a lap later.

“Water really was everywhere. Running down the track, sitting in each rut and any low spot just became a pond. By the time I took the checkers I had worn through the knees and the butt in my pants.

“I definitely got my money’s worth of seat time at this one.”