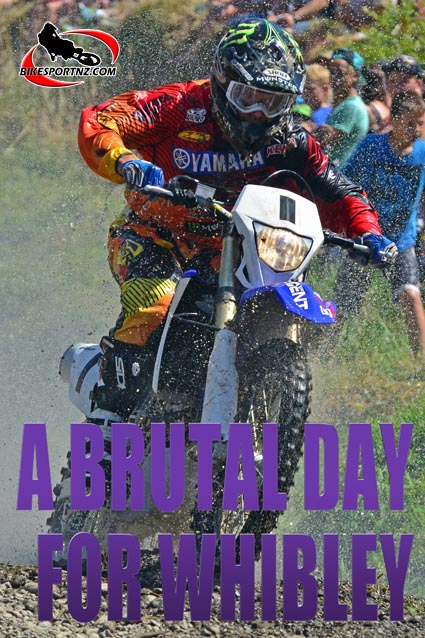 It was a tough day at the office for Paul Whibley in the United States at the weekend and the Kiwi hero was grateful that he could still emerge with a few more points in his bid to retain the No.1 plate on his Yamaha bike.

The 34-year-old former Manawatu forestry worker, affectionately dubbed “The Axeman” on the motorcycling scene, finished a strong fifth overall at round five of the Grand National Cross-country Championships (GNCC) in Kentucky at the weekend, leaving him sixth overall in the 2013 championship chase with eight rounds still to come.

Whibley (Yamaha YZ450F), from Pahiatua, won two major cross-country titles in the US last season, clinching the GNCC and the Off-Road Motorcycle and ATV (OMA) crown as well, but his defence of those two titles has so far not been an easy one.

“Constant rain starting Friday night and continuing through to around noon on Sunday had the fifth round of the GNCC series all shook up,” Whibley explained.

“The youth bike race ran on a severely shortened track and the morning race bikes were merged in with the afternoon race. The race was also on a reduced course of around eight miles and a shortened duration of two hours.

“I got a good jump off the line and got to turn one up front but made a mess of rounding the turn and Thad Duvall snuck by and took the holeshot honours.

“I followed Thad for the first couple miles, trying to avoid the thick roost. At around the three-mile mark Thad and I went right around a mud hole and lost time to others who went left. Even at this early stage, it was hard to tell who was who. The track was quite different to what we had walked.

“A lot of sections were diverted to roads and, what wasn’t a road, was cutting up fast. Beginning the second lap we ran into traffic, some riders had only made it just inside the first woods section off the start line before getting stuck. Mid lap a large bottleneck sent us scrambling into the woods to find a way around. I got to a point where I had to jump off and drag my bike under a log to get on the uphill side of a blockage. I thought this section might end the race  … and it did for many … but we kept smashing a way through the trees to get past lap after lap.

Late in the race a stick speared through my front fender and into my radiator. I thought my race was done right there. Lucky for me, Yamahas are tough bikes and I completed the race, albeit at a reduced pace, to take fifth.

“It was a tough day, but I’m stoked to finish and get some points when many didn’t.”