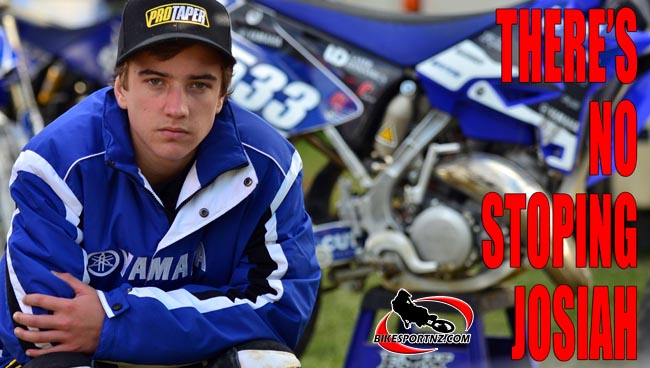 With five wins from five starts, there was simply no stopping Waikato’s Josiah Natzke at the weekend.

Natzke was unbeatable at this season’s New Zealand Junior Motocross Championships in Taranaki at the weekend, powering his way to a Yamaha 1-2 at the top of the 12-14 years’ 125cc class and finishing a solid 15 points ahead of his nearest rival, Ngatea’s Benjamin Broad.

By finishing runner-up each time, Broad (Yamaha YZ125) kept the pressure on Natzke and gave himself a sniff of a chance of beating the Hamilton ace to the crown, but Natzke made no mistakes and his bike never skipped a beat, meaning Broad’s title hopes were really only a very remote possibility.

Natzke, a year 10 pupil at Hamilton Boys’ High School, had been sidelined with injury during the junior nationals last season, but he returned to action this year fiercely determined to make his mark.

“It was a great weekend,” beamed the 14-year-olds Natzke afterwards.

“I was going to race the 250cc class at the nationals as well, but my fitness is still not 100 percent. As it was, I struggled a bit with ‘arm pump’ over the weekend and needed to strap up my forearms.

“Hat’s off to Ben Broad though. He certainly kept me honest and put on a great show.”

In the premier junior class of the championships, the hotly contested 14-16 years 250F division, it was another Yamaha rider, Kairyn King (YZ250F) who narrowly missed out on the title, that victory instead going to Atiamuri’s Hadleigh Knight (CMR Red Bull KTM 250SXF).

King rode brilliantly to secure second overall by winning one out of five races along with several more podium finishes in a talent-stacked field.

Knight finished 1-1-2-3-1 to take the title by what was in the end a comfortable margin of 14 points.