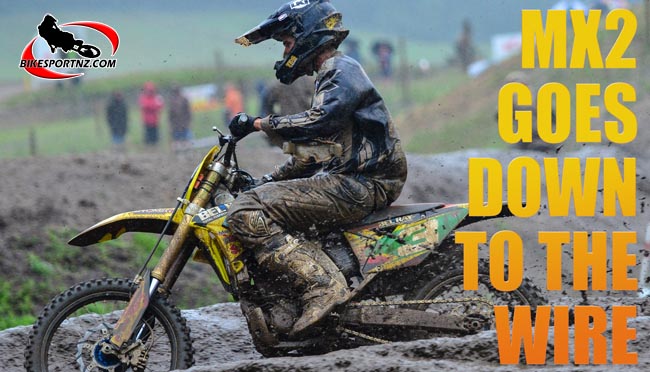 The MX2 class was an absolute thriller at this year’s 41st annual Whakatane Summercross, with perhaps any one of five or six riders capable of snatching race wins.

And while three separate individuals shared the race wins during the soggy day of motocross action, it was Mount Maunganui’s Rhys Carter (Bel Ray Moto City Suzuki RM-Z250) who took the ultimate prize, the trophy for winning the class overall.

Carter never finished below third all day, his consistency ensuring he wrapped up the overall win, albeit by just one point from Taupo’s Cam Dillon (Bel Ray Huka Honda CRF250), but it was his last-race, last-corner pass on Queenstown rival Scotty Columb (JCR Yamaha Racing YZ250F) that was the highlight of the day.

“I didn’t know how the points stacked up during the day,” said Carter. “I was just taking each race one at a time.

“I did know I was leading the points going into the last race, but there wasn’t much in it and if I hadn’t made the pass on Scotty right at the end of the last race, I wouldn’t have taken the overall.

“I only qualified eighth overall, so it was not a good start to the day. But it all worked out in the end,” he shrugged.

“It was all about staying cool and not riding over my head in the tricky conditions.

“But I have a little bit of work to do on my fitness before the nationals.”

“Naturally, we are thrilled with Rhys’ result today,” he said.

“As the conditions here become tougher by the minute, he just dug even deeper.

“It was his consistency, a strong will and heart that gave him the win today.”

Time and again, Carter pointed his RM-Z250 into the axle-deep bogs and, time and again, he powered through, plastering his rivals in the process. Prepared by the Moto City performance division, Speed Shop, the bike never skipped a beat all day.

Carter’s MX1 class team-mate, Mount Maunganui’s Cody Cooper, had a tough day at the office, a collision with another rider in race two consigning him to an uncharacteristic sixth spot and he was therefore unable to claw his way onto the podium.