The Yamaha ace from Pahiatua won the Grand National Cross-country Championship title in 2009 and has been second or third every season that followed, until he broke through again at the weekend to claim the No.1 spot again

Just last month the 34-year-old former Manawatu forestry worker, affectionately dubbed “The Axeman” on the motorcycling scene, wrapped up the parallel Off-Road Motorcycle and ATV (OMA) crown for a fifth consecutive season and now he’s has claimed the double, clinching the GNCC title at a thrilling final round in Tennessee at the weekend.

“I came into the final event trailing Kailub Russell by one point after leading the whole season,” said Whibley. “I knew the last one was going to be a big day.

“The Loretta Lyn’s track has been good to me in the past winning there last year but it has not been one of my favourites with its hard base and rocky soil. This year the trail was dry but an effort had been made to utilise some fresh woods.”

Whibley kicked off the event by snatching the holeshot, leading the riders out of the start zone, while his main rival for the title, American KTM rider Russell, was getting tangled in traffic.

From there it was a simple matter of Whibley riding sensibly, minimising mistakes over the three-hour race and he eventually took the chequered flag more than two minutes ahead of Russell, while American Yamaha ace Jordan Ashburn took third spot.

“I just rode my own race today and couldn’t ask for the season to end a better way,” Whibley said. “It’s been an awesome year, we’ve had some huge battles with a lot of the guys and it’s been exciting for the fans being this close down to the final round.

“You can’t really compare this championship win to the last one in 2009, I really didn’t know what I was getting myself into back then,” Whibley said.

“To win the championship it was a dream come true and then to get it taken away the next year consumes you and all you want is that number one plate back. So to finally get there, it’s awesome. It’s hard to put into words the feelings and emotions and what we’ve been through to get here and hold this number one plate again.”

This was enough for Wellington’s Mead – the New Zealand enduro champion for Yamaha in 2010 – to secure third overall in the GNCC series for 2012.

Mokau farmer Smith (Yamaha), who contested just the final few rounds of the GNCC this season following an amazing double national title win in New Zealand earlier in the year, it was an encouraging result.

Smith is intending to contest a full GNCC season in the next year or two. 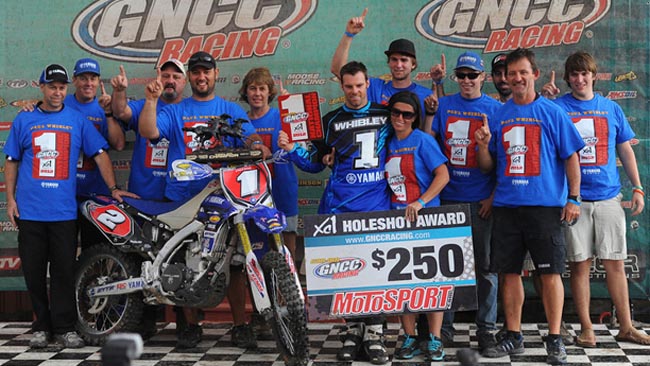