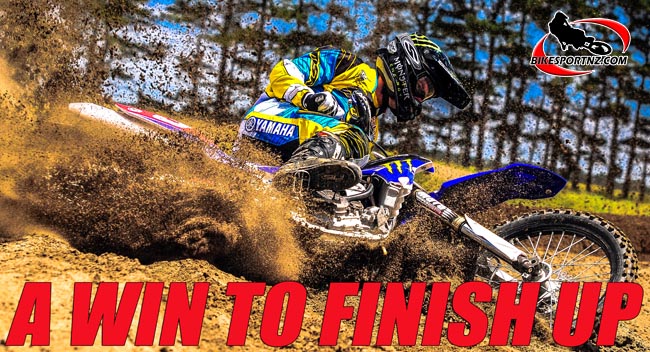 Pahiatua’s Paul Whibley has enjoyed an international season of racing that is nothing short of sensational this year.

With two major American titles in the bag for 2012, the 34-year-old former Manawatu forestry worker, affectionately dubbed “The Axeman” on the motorcycling scene, was determined to sign off his US campaign with another victory and that’s just what he did at the final round of the Off-Road Motorcycle and ATV Championships in Camden, Tennessee, at the weekend.

The Yamaha ace wrapped up the Grand National Cross-Country Championships just over a week ago and he had also secured the OMA crown before the weekend’s final round, so the pressure was off for the New Zealand hero.

But taking things easy is not in the nature of Paul Whibley.

In the end, Whibley took his YZ450F to a convincing win at the OMA finale, although his rivals were equally determined to make the Kiwi work hard for it.

“The first turn was loose, rocky soil and Russell Bobbitt nabbed the holeshot. The first few straights I got showered in stones as I tried to make something happen before we dove into the woods,” said Whibley.

“The first section was tight and fresh with a lot of leaf cover. I hit something and washed the front out, allowing Nick Fahringer to get by. I quickly remounted and gave chase before my teammate Jordan Ashburn could sneak by as well. Nick and Russell both set a good pace and it took a couple of laps before I could take the position back from Nick.

“Russell was running up front and in clean air had built a buffer of about 20 seconds. I put my head down and bridged the gap just before we came in for fuel. (My wife) Katherine rounded up photographer Ryan Brehob to help with the fuelling and he proved he can handle a dump can just as well as his camera.

“With three laps to go, the pace seemed to step up with each lap.

“A small mistake by Russell in the tight section allowed me through to the lead with a lap and a half to go. Midway through the last lap, Russell pulled out a line that he was saving and retook the lead. The pace was now upped to a frenzied moto. I sliced up the inside in a turn and showed him a wheel, putting some pressure on.

“Then on the next straight he blew a turn and ran wide into a rain rut. I took the lead and held it on to the finish. Russell pushed me right to the line, with Nick not far behind us in third.

“It was a great way to finish up the OMA season for 2012. Again I want to say thanks to all the great sponsors and supporters who made this possible. Also, a big thanks to everyone who has helped us out in the pits this season.”

Whibley now returns home for a break over the Christmas period. During that time he will organise his own event, the Taikorea 500, a multi-race cross-country event at the Taikorea Motorcycle Park facility that he owns, just outside Palmerston North.