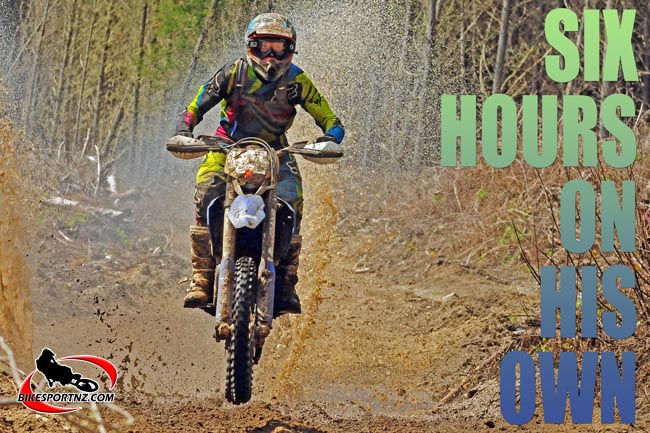 One bike, one man, six hours – that’s an awful lot to ask for.

But that was exactly the plan for Tauranga’s Reece Burgess (Husaberg FE450), who not only won the ironman section of the big Six-Hour Dirt Bike Challenge on Saturday, but also threatened early on to steal away with the marathon event outright.

Te Awamutu’s Mark Penny and Queenstown’s Scotty Columb combined on a Suzuki RM-X450 to eventually win the race, but they had a fight on their hands as Burgess led the way throughout the opening few laps, forcing an incredible pace.

Burgess had the lead soon after the shotgun blast sounded to signal the start, just after 9am on Saturday morning, and he quickly set a blistering pace on the undulating course, set out on forestry land midway between Taupo and Tokoroa.

“For the first couple of laps I had a bit of fun learning the course but I went hard while I knew I could. I rode conservatively after that to save energy. I knew I could afford to do that because I’d built up a gap on most of the field,” said the 33-year-old Burgess.

“I had figured on doing eight laps, but it was nine for me in the end. I just settled into a routine and cruised at the finish.”

Race co-winner Columb, a motocross professional who works as a tour guide for Off-Road Adventures in Queenstown when he’s not racing, praised Burgess afterwards.

“I want to give credit to Reece Burgess. He was racing it as an ironman and he led for quite a while. He’s definitely going to have ‘monkey butt’ this week.”

Runners-up were the two-rider team of Auckland’s Chris Power and Palmerston North’s Adam Reeves (Yamaha WR450F), while third outright was the KTM pairing of Mike Skinner and Freddie Milford-Cottam, this combo with a particularly interesting tale of their own to tell.

In the event build-up, the pair had chosen to co-ride Milford-Cottam’s KTM XCW200, but that plan fell apart when Milford-Cottam became the victim of a burglary, his bike and the KTM 400 belonging to his father disappearing in the theft just a week before the big race.

But then fate played a hand.

“The police busted the house of a well known receiver of stolen goods, looking for a stolen Apple iPad that, unfortunately for the thieves, had a GPS tracker programme installed in it and so the police knew where to look,” Milford-Cottam explained. “The police had a look around the house and found the stolen bikes underneath a tarpaulin behind the building.

“We got the bike back on Monday and we rode it like we stole it today,” he laughed.

In all, KTM proved to be the most popular brand of all the manufacturer entries – Of the bikes on the start line, 43 were KTM, 15 each for Yamaha and Suzuki and 11 were Hondas.

Only five teams or individuals completed nine laps in the six hours, with some combinations managing just three or four of the 32-kilometre laps.