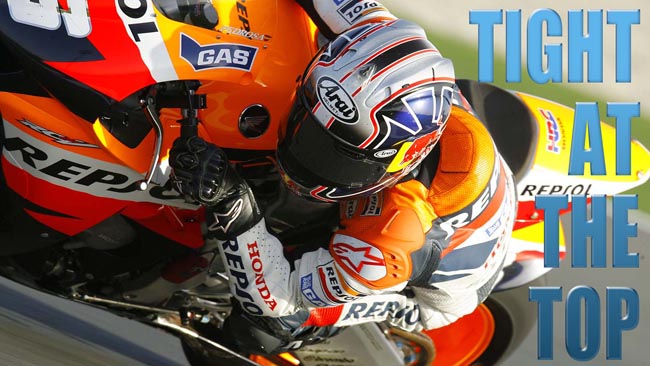 Dark overcast conditions meant that all 22 riders chose the softer rear tyre alongside the harder front, with Lorenzo bravely sweeping around the outside of Pedrosa to defend his pole position into turn one.

Lorenzo’s Yamaha team-mate Ben Spies held an early third before running straight on and falling after hitting a barrier, thankfully at a much lower speed than Nicky Hayden at Aragon, at the start of the second lap.

That blew a hole between the leading Spaniards and the rest of the field, which grew even larger as the race went on. Pedrosa shadowed the Yamaha rider until peeling out of his slipstream and taking the lead under braking into the turn five right-hander, on lap 12 of 24.

Pedrosa then pulled away from Lorenzo to win by 4.275s, cutting Lorenzo’s lead to 28 points with three rounds and 75 points to go. Pedrosa has now won four of the past five races, having been taken out at Misano.

Joining Lorenzo and Pedrosa on the rostrum was Alvaro Bautista, who celebrated his new Gresini Honda contract with a second ever MotoGP rostrum.

Tech 3 Yamaha’s front row starter Cal Crutchlow had reclaimed third after Spies’ early exit, but was hunted down by Bautista, who lunged inside the Englishman with five laps to go.

The all-satellite battle continued when Crutchlow briefly re-passed Bautista with three laps left and he was still in podium touch as the final lap began … only to run out of fuel, forcing him to park his M1 and punch the tank in frustration.

That moved team-mate Andrea Dovizioso to fourth and Casey Stoner to fifth on his MotoGP comeback. Stoner, absent for the past three rounds following ankle surgery, held fourth in the early stages before being overtaken by Bautista and then Dovizioso.

Aleix Espargaro was the top CRT rider in 12th place, with Aspar team-mate Randy de Puniet suffering yet another fall. Avintia Blusens rider Yonny Hernandez also tumbled and is feared to have fractured a collarbone.

Roberto Rolfo, drafted in to the cash-strapped Speed Master squad in place of Mattia Pasini for the remaining rounds, finished his first MotoGP race since 2005 in 16th and last place.

Japan was the first of three consecutive ‘flyaway’ rounds, prior to the Valencia season finale. Practice for the Malaysian Grand Prix at Sepang starts on Friday.

MotoGP world standings, after 15 of 18 rounds: