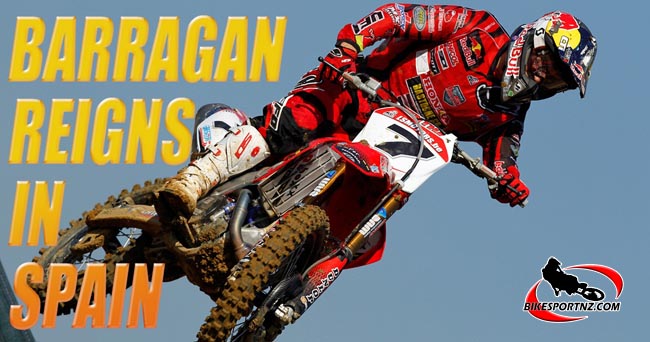 The LS Honda Racing rider clinched the Spanish MX1 Elite title at La Baneza in the north western region of Castilla and Leon at the weekend.

The popular Spaniard entered the final round of his domestic series with an 11-point lead over Alvaro Lozano, the 2010 Spanish champ. In the end, two third placings were enough for ‘JB’ to capture his second consecutive MX1 title at home, already the fourth national MX1 title of his career.

After hosting the Spanish Grand Prix last year the Circuito de la Salgada received the honour of staging the last race of the eight-round Spanish Championship. Located on a plateau with some scenic views of the surrounding countryside the hard-pack La Bañeza track combines one fast section with tight and twisty elements featuring several switchback corners.

In spite of his points advantage going into the race, both motos provided Barragan with a serious challenge. Because after fracturing his right finger during the last GP in Teutschenthal, Barragan sat out the MX of Nations and needed to race through the pain barrier to finish the job.

Barragan grabbed the holeshot in the opening moto, and rode to a calculated third behind José Antonio Butron and Lozano.

“With the championship on the line the 27-year-old from Madrileno did not have the start he wanted in moto two. However Barragan kept his cool to make his way up from sixth on the opening lap to third across the finish line.

“To reclaim my Spanish title was absolutely one of my goals!” said Barragan afterwards. “So to pull this off here, in spite of the injury with my finger was really great. It was a pity to miss the MXoN and the opportunity to defend my country but this was the only right choice to give the maximum in La Baneza. Both José Antonio (Butron) and Alvaro (Lozano) were faster today so I decided to ride safe.

“With eight rounds the MX Elite is quite a long championship, everything can happen. Also I started the season with an injury which made it not so easy. That makes this title even more special! After a disappointing season I’m happy for the team and my fans to give them something back.”

Steven Lettani, team manager LS Honda Racing, said: “I can only congratulate Jonathan and his mechanic Denis on a job well done! It has been quite a big program to combine the eight races of the Spanish MX Elite with the MX1 World Championship, but we made it work.

“We have seen that ‘JB’ displayed a speed and aggression at home that seemed very difficult for him to reach in GPs. Hopefully this championship will help his confidence. For us the Spanish MX1 title is a nice milestone. In the last four years we have now four major titles, so that’s becoming a strong legacy! To do this in three different countries is really cool as well. Maybe we should add the European flag behind our team name.”