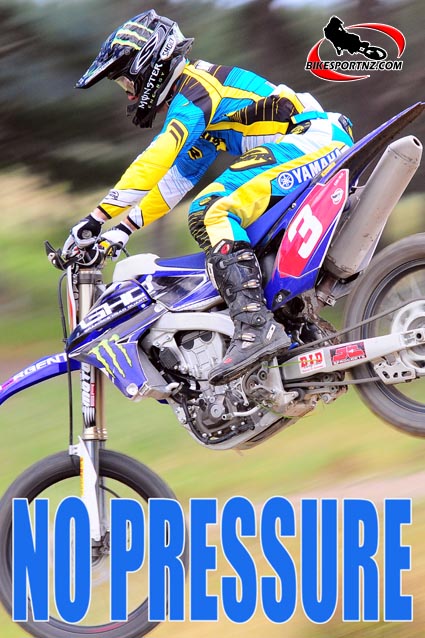 Preparations for Paul Whibley’s final push to win the major American crown on the US cross-country circuit this season is steadily building momentum.

With another win at a lesser North Carolina Hare Scramble Association (NCHSA) race last week, the New Zealand hero hopes that momentum will see him wrap up the Grand National Cross-country Championships (GNCC) when that series resumes after its mid-summer break for the final four rounds starting with the 10th round of 13 at Unadilla, New York, on September 16.

Whibley kept himself sharp for that final GNCC onslaught by comfortably winning the NCHSA race at Taylorsville.

“My odds for a good start were pretty slim after picking the last spoon out of the bucket. After everyone was lined up I managed to squeeze in on the very inside. It wasn’t very flat but it beat being on the outside and getting pushed wide.

“When the flag dropped I managed a pretty good start, coming out in second from the first turn. Matthew Nix got the holeshot and was out front. Matthew lives close to our base in Travellers’ Rest, South Carolina, and we quite often train together, so we knew each other’s pace and early on he left me plenty of room to squeeze by down one of the straights.

“I was thankful to have my race wheels kitted out with ‘tireballs’ on the bike for this event as there were plenty of rocks on the trail just waiting to spoil your day.

“About three quarters of the way through the first lap I washed the front end out on a stick that was lying on the track. After picking my bike up and trying to take off, I felt that something was not right. At first I thought the chain was off.

“A quick check revealed all was good there. Then I tried changing gears but still the bike wouldn’t drive. I checked the gear lever and all was good there too. I finally found that something had hit the clutch cable and twisted it. Once I straightened it out, the free play returned. While I was messing with the bike, four or five guys went by and, after another quick stop to adjust my twisted clamps, I was back in the race.

“I began making my way forward, retaking the positions I gave up while working on the bike and by late in the second lap I was moving back into the lead. The rest of the race was pretty uneventful, putting in safe and consistent laps, eventually taking the win.”