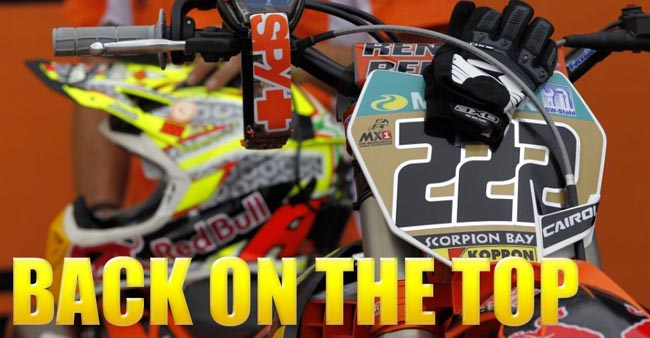 MXlarge.com journalist Geoff Meyer caught up with defending MX1 world champion Antonio Cairoli after the Latvia GP. This is what he had to say …

Having lost his red plate at the Grand Prix of Sweden, the Italian legend came back in Latvia with a stunning victory. It didn’t all go his way though, as he struggled with a crash in the second moto and picked up a slight injury to his wrists.

Two weeks earlier in Sweden, Cairoli failed to score any points and lost his massive lead in the series points. While Sweden was a nightmare Latvia turned into a dream as he picked up his 48th Grand Prix victory and is now just two wins away from the great Joel Robert for career GP wins.

Antonio, it must have been nice to come back with a win after what happened in Sweden?

I am really excited about my riding at the Grand Prix of Latvia. Everything went well apart from the last moto crash. I won the first race with a good lead but I had a scare after the crash in the second race when I was in the lead. I had some pain in both of my wrists when I stood up from the crash but I put my head down and tried to make passes. I was feeling confident.

How is your wrist?

I didn’t know what to expect about my wrist and I hope with this little injury I can train good for next weekend in Russia.

Can you explain what happened in Sweden, because it must have been one of your worst weekends ever?

What happened in Sweden was probably my worst race ever, you are correct in saying that. I was around fourth or fifth and then one time I went over a jump and I felt that the back wheel was locked up. I tried everything to get the back wheel spinning, but it didn’t work and I was just stuck. In the second moto I just got stuck in the mud and I couldn’t get out.

How has your attitude changed now that the big points lead is gone?

My attitude hasn’t changed at all, I want to win, that is always my goal, and I will give it 100% every time I go out, but I also won’t push too hard. I worked hard in the early part of the season to get a big points lead and I lost a lot of points in Sweden, but that doesn’t mean I have lost track. Now I work hard to get that points lead back again.

What do you need to improve to get that points lead back?

I need to get better starts, getting top three out of the start is really important. I like to race with Christophe Pourcel and I have always felt that way with him and I respect him a lot. Desalle is something different, I don’t always like racing against him.