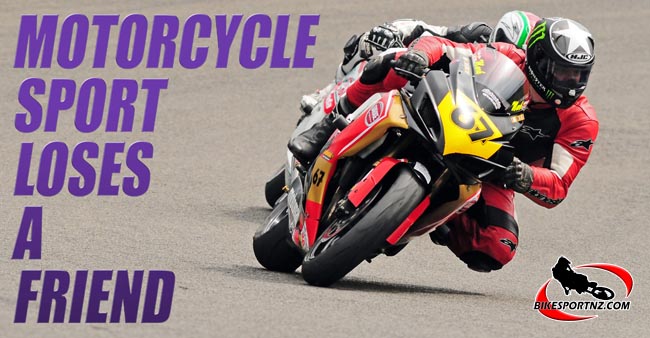 The New Zealand motorcycling community is in mourning with news of the tragic death of Lower Hutt rider Mark Brehaut at the weekend.

The 45-year-old was racing at the opening round of the Victoria Motorcycle Club’s popular Winter Series at Manfeild on Saturday when the accident occurred.

The 53-year-old rider of the other machine suffered serious leg injuries and was taken to hospital.

The accident happened as the riders crossed the line at the conclusion of a formula two race, for bikes up to 600cc.

Brehaut raced an immaculately-prepared Suzuki GSX-R600, decked out in the colours of his hero, British ace Barry Sheene.

His Team Brehaut Racing was born out of his life-long passion for motorcycles and motorcycle racing.

The team was formed after he recovered from emergency brain surgery in late 2008 so he could pursue his sporting interest, encourage other people to live life to the full and promote the foundation.

It also raised money for the Cancer Society and Whanganui Hospice.

Brehaut once lived in Wanganui and played football for Wanganui City in the Central League.

After immigrating to New Zealand, Brehaut settled in Wanganui and grew up watching the likes of the late Robert Holden and Roger Freeth racing around the Cemetery Circuit.

He had a dream of riding the Cemetery Circuit on Boxing Day, and achieved that ambition last year, although he narrowly missed qualifying.

Brehaut leaves behind a widow, Janice.