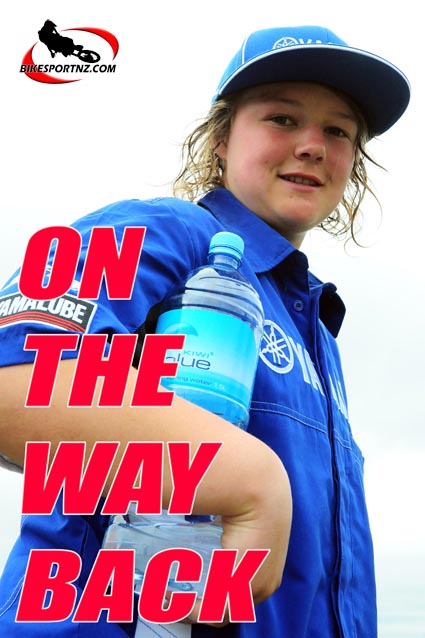 Kiwi motocross heroine Courtney Duncan has been notable for her absence from top-level motocross in recent months, but it probably won’t be long now before we see her tormenting the boys once again.

The 16-year-old Yamaha ace from Palmerston, in south Otago, has just undergone a second remedial operation to repair both her knees, injured while training about two years ago.

She said she could be back in action in the next month or so, perhaps as early as May.

“I’ll be back racing again just as soon as I can feel comfortable and confident in my knees,” said Duncan, who had sensationally finished with a world ranking of sixth in the 85cc class at the Junior World Motocross Championships in Taupo in August 2009.

“The damage to my knees came from an accident I suffered while training at home in September 2009. I didn’t actually crash. I put my foot down on the ground and tweaked it funny while riding on my home track.

“I knew something wasn’t right but because I was so young then – only 13 – the doctors didn’t really pick up on it.

“I have had heaps of trouble with my knees since then. I haven’t really been 100% in about two-and-a-half years.”

That admission gives added credit to her remarkable podium achievements at the United States Junior Motocross Championships at Ponca City in July last year, a week-long event in which she turned heads when beating so many of the world’s junior elite.

She scored back-to-back wins to steal away with the USA 65-85cc girls’ crown and then, although a year younger than some of her male rivals, Duncan finished third overall in the 85-150cc stock class – her 3-2 race results earning her the podium spot – and she also finished the event ranked fourth overall in the 85-150cc modified class after finishing 3-5 in her two outings.

“I wasn’t really riding in pain but my knees would pop out now and again and I’d have to have a couple of days off riding.

“I raced at the Taupo Motocross Extravaganza last October and then when into hospital for the first of two operation on my knee in November.

“I could barely walk after that and was in a wheelchair and then on crutches for two weeks.

“I’ve been cycling and swimming every day at the moment and doing physiotherapy too. I have only just been given the medical release to go running and that’s very exciting to see progress.

“It’s a very serious thing and I want to make sure I recover properly. I have been listening well to advice and, although nothing is set in stone, it won’t be long now before I’m back on a bike again.

“I’ve missed a lot of motocross lately and I can’t even bear to go and watch. It’s just so frustrating not being able to ride, to not be out there on the track.

“Since I started racing at age seven, this is the longest I’ve ever been off a bike. I’m well over my record now.”

When she finally gets the thumbs-up to go racing again, it’s likely to be at an international event.

“We are still in the planning stages, because everything is on hold, but I want to go back to America and race there again. I got a taste of racing in America last year and that’s where I want to be. I want to ride there fulltime.

“That’s the dream and I hope it comes true.”