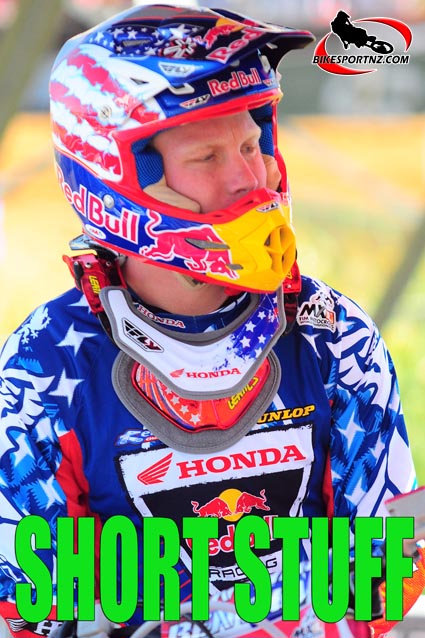 Champion in 2011 and again this year – the Kawasaki rider wrapping up a successful title defence with rounds to spare this time around – Villopoto nonetheless was unable to continue his sensational run and it was Andrew Short’s night in Seattle.

After nearly six seasons of racing in the Supercross Class, Honda’s Short, of Smithville, Texas, captured his first career win in the premier division, leading every lap.

Short was the first rider out of the gate in the Supercross Class Main Event, securing the holeshot award with Honda’s Justin Brayton and Red Bull KTM’s Ken Roczeni close behind.

Behind them, 2012 Monster Energy Supercross Champion Villopoto went down following a mid-pack start, appearing to favour his leg while on the ground. The Monster Energy Kawasaki rider walked off the track under his own power, but did not complete a lap of competition in front of his hometown crowd.

“Ryan didn’t get such a good start,” said Reid Nordin, Monster Energy Kawasaki Team Manager. “He was charging through the pack and lost the front end and ended up getting a handle bar to the gut, which knocked the wind out of him, and he got a stinger when the foot peg came down on him. He’s really bummed out and upset with himself with what happened. He really wanted to do well for the fans here.”

Out front, Short and Roczen began a spirited battle for the lead on Lap 6, shifting momentum back-and-forth for several laps. Eventually, Short asserted himself in the top spot and took the win comfortably.

“It doesn’t feel real,” exclaimed Short, who missed seven races earlier this season to injury. “My team has been through some challenges, but we stuck together. There are so many people who have helped me in 11 years of doing this. I’m getting old. I didn’t believe (I could win) too much until the end and I think that’s been one of my problems in the past. All I wanted to do was be out here and to win is unreal.”

Roczen posted a career-best runner-up finish in first race in the Supercross Class this season. Monster Energy Kawasaki’s Jake Weimer, of Rupert, Idaho, rounded out the podium in third.

As the gate dropped on the Western Regional Supercross Lites Class main event, Kawasaki’s Dean Wilson, of Scotland, edged out both Sipes and Honda’s Eli Tomac to grab the holeshot award, only to have Sipes assert himself in the lead shortly thereafter.

As Sipes opened a margin over the field, Wilson and Tomac went head to head in a heated battle for the runner-up spot. The class’ two top contenders for the championship traded the position a few times, before coming together on lap eight, causing Wilson to fall to the ground.

Tomac looked to close in on Sipes, but was ultimately caught by Red Bull KTM’s Marvin Musquin, of France, on the final lap. Sipes led all 15 laps of the main event, bouncing back from an injury he suffered earlier in the season.

“I worked really hard to come back here and didn’t think I’d be able to,” said Sipes, who has won just two points-paying races in his career. “I tried not to push. I tried to conserve and flow. I didn’t go fast, but I didn’t go slow either. The first five races (this season) were so tough. I felt good, but I was pushing too hard. It just feels so good to come back form (my) injury like this.”

Musquin held on for second, while Tomac finished third, taking over the points lead from Wilson, who recovered to finish seventh following his crash.

“I wasn’t happy with my heat race, but it was go time in the main event,” said Tomac, who holds a four-point lead in the championship standings. “Dean (Wilson) put some block passes on me and I said, ‘let’s play.’ I got into him there, but I guess that’s racing. I was rusty in practice but I gave it my all tonight. When we made contact, my clutch was bent, so I was riding in third gear. I’m looking forward to Salt Lake City because it’s like a home race for me.”