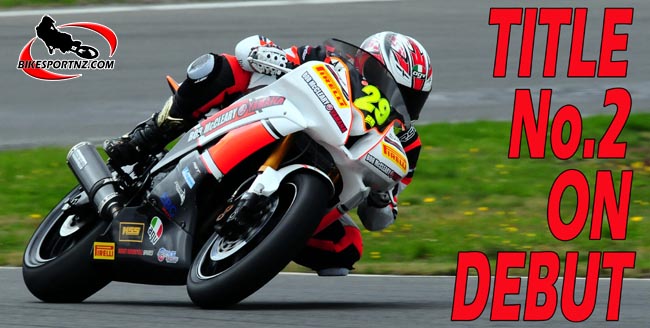 Rangiora’s Jake Lewis made it back-to-back national titles when he collected the 600cc superstock crown at the fifth and final round of the New Zealand Superbike Championships in Taupo on Sunday.

The Canterbury rider was just 16 years old when he won the 125GP title in his nationals debut last season and, for 2012, he stepped up to the 600cc class, riding a Bob McCleary Yamaha R6.

The now 17-year-old Lewis finished a safe third in his first 600 superstock outing at Taupo on Sunday, enough to give him a 26-point buffer, enough to wrap up the title.

It meant he didn’t need to ride the tenth and final race of the series later that afternoon, but that’s not the way a true racer like Lewis wanted to bow out.

So, just to ram home his dominance this season, he went out and won the last race, ending the championship a massive 38 points clear of Timaru’s Johnny Small (Suzuki), with another Canterbury Yamaha rider, Christchurch’s Daniel Ornsby, taking the third step on the championship podium.

“I was surprised with how much I dominated and at how fast I seem to be going so early in my career,” he said.

“I think the secret is just being well prepared before I actually get on the track. I can’t thank Grant Ramage (of Timaru) enough for all that he’s done for me.”

Two-time former national 250cc champion Ramage has mentored Lewis since he was 13.

Lewis now prepares himself for a season of racing in Europe, contesting the European junior Cup series, kicking off at Assen, in the Netherlands, on April 22.