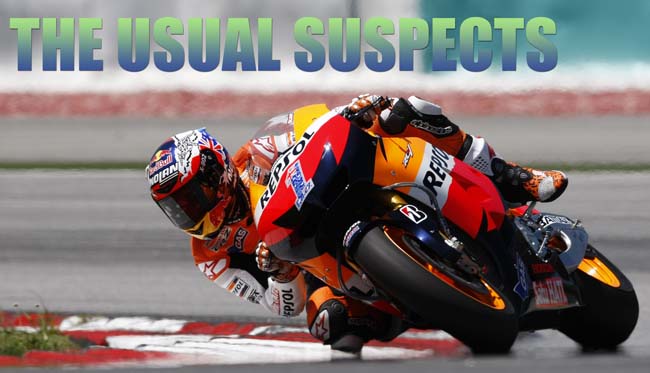 With one of those ‘aliens’, seven time MotoGP champion Rossi, still to find form at Ducati, Stoner expects his main rivals be Yamaha’s former champion and 2010 runner-up Lorenzo, and Honda team-mate Pedrosa.

“I think we can guarantee Jorge will be running up front, same as Dani,” said Stoner, fastest at both Sepang pre-season tests.

“It’s always the same ones. I think if Valentino was on a bike he is comfortable with he’d be running at the front as well, so hopefully they can make some improvements.

“It’ll be the usual suspects. Maybe there will be some changes and a few surprises, but we can guarantee that Jorge and Dani will be there.”

Lorenzo was second to Stoner at the first Sepang test, with Pedrosa runner-up in this week’s return visit.

The third and final official test will be held at Jerez from March 23-25, when the full 21-rider grid – 12 manufacturer bikes plus nine of the new privateer ‘CRTs’ – will be on track together for the first time.

The first race of the new season will then be held at Losail, Qatar on the evening of April 8.