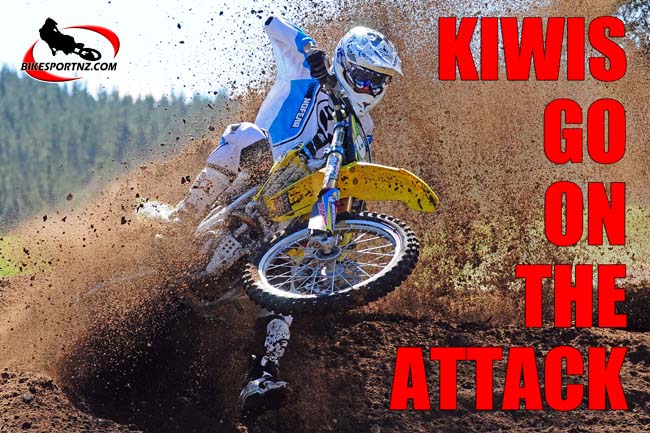 New Zealand will have a huge presence on the Australian motocross scene this season, featuring riders mostly from the Bay of Plenty region.

The Australian Motocross Championships kick off at Conondale, in Queensland, on Sunday with four young Kiwis set to tackle the cream of Australia’s rising stars in the under-19 section of the championship.

Rotorua’s John Phillips will ride a Honda in the same class, while Atiamuri’s Dion Picard will campaign a Suzuki, making it four Kiwis lining up alongside the home-country stars chasing under-19 honours.

Auckland’s Cannon Smith will manage the team, which is also sponsored by Monza imports and Dragon Goggles.

Jeff Leisk, of KTM Australia, is supplying the bikes.

“It’s very exciting for Kayne,” said Lamont’s father, Stu. “He is very enthusiastic and has been training already on the KTM. We owe a huge thanks to Cannon Smith and Martin Collins for setting this all up.”

Sponsored by BikesportNZ.com, Lamont has been racing for Suzuki in New Zealand and, for the time being at least, will continue to do so at home. Lamont spent much of last season racing the British Motocross Championships, so his experience racing against Grand Prix riders there may give him an edge in Australia.

In addition to Lamont, McGoldrick, Phillips and Picard, another crop of New Zealand’s best will cross the Tasman to tackle the senior classes.

Just-crowned national MX1 champion Ben Townley, of Taupo, will contest at least round one before he takes up his contract to race in the United States, while fellow Kiwi internationals Josh Coppins (NZ MX1 No.2), of Motueka, and Cody Cooper (NZ MX1 No.3), of Mount Maunganui, national MX2 champion Darryll King, of Hamilton, and former Kiwi champion Michael Phillips, of Rotorua, will join him on the start line to race the open class in Australia.

In the MX2 (Lites or 250cc) class, a strong challenge will come from former New Zealand MX1 champion Justin McDonald, of Christchurch, and Queenstown’s New Zealand MX2 No.2 Scotty Columb.